I’m a great believer in getting back to work when bad news hits, and I suspect Arthur C. Clarke was as well. His almost 100 books surely attest to the fact. With intriguing exoplanet news about to be released, that is exactly what I’ve been doing this morning, with an article I’ll post tomorrow. As I’ve been developing that story, I’ve kept pondering what to say about Clarke, working up a kind of reminiscence in the back of my mind, then deciding everything was happening too fast for that.

Not that his death was a surprise, Sir Arthur having been ill for quite some time, but the thought of a world without Clarke in it takes a bit of getting used to. I’ll need some time to take its measure. 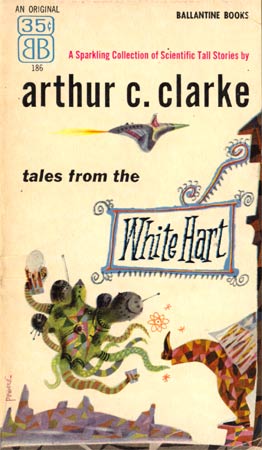 Oddly, my favorite of his books was the relatively obscure 1957 collection Tales from the White Hart. The yarns in this slim volume involve one Harry Purvis, like Clarke a polymath who deals knowledgeably on most any subject, and a man whose improbable accounts flummox the ready audience in the White Hart pub. I point not to any single story, but to the cumulative effect. For when you get to know about Clarke, you learn about the British Interplanetary Society, the space-energized group of which he became so significant a member, and you learn about lively pubs.

Image: This is the first edition of Clarke’s Tales from the White Hart, Ballantine Books 186, complete with Richard Powers cover.

Instead of the White Hart, the BIS generally met at London’s Mason’s Arms pub on Maddox Street, its gatherings the basis for the later Clarke stories. Imagine some of the most imaginative people on the planet sorting out things to come in the era before World War II. Imagine them in the postwar era, still haunting their pubs of choice, as they went about the audacious work of designing from top to bottom a starship they would call Project Daedalus, a one-way flyby probe of Barnard’s Star that would use nuclear micro-fusion to reach 12 percent of light speed.

Clarke’s signature was all over the early British Interplanetary Society, and his Tales of the White Hart reminds me how a dedicated band of thinkers — writers, scientists, engineers — can stir up change by sheer persistence and an unwillingness to accept defeat. Out of all this grew, among other things, the Journal of the British Interplanetary Society, a key venue for innovative ideas. Here I quote Geoffrey Landis: “JBIS has been the home of advanced concept thinking for a very long time now.” Yes, and you can weave a history of interstellar studies from its pages.

I pause on this note, knowing his death will trigger associations for a long time to come. Sir Arthur’s work has inescapably shaped my own concept of the future. I was pleased that in one of the obituaries I read, Clarke said that out of all his accomplishments, he would most like to be remembered as a writer. Those of us who write for a living can find satisfaction in pursuing a career Sir Arthur so honored, even while acknowledging that his was a vision no one will be able to replace.