Well-studied HD 189733b is a Jupiter-sized planet again in the news. Studying this transiting world, scientists using Hubble Space Telescope data have made the first identification of an organic molecule — methane — in the atmosphere of an exoplanet. What’s particularly significant here is the growing sophistication of our use of spectroscopy, splitting light into its components to tease out the constituents of the atmosphere under study. This new finding shows that we’re on target in planning to use space-based observatories to make far more challenging detections. 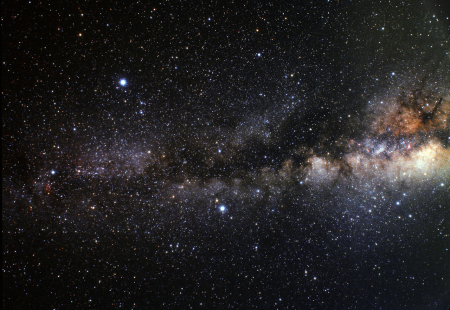 Image: A wide field image of the region of sky in which HD 189733b is located. In this image we can see the asterism of the “Summer Triangle” a giant triangle in the sky composed of the three bright stars Vega (top left), Altair (lower middle) and Deneb (far left). HD 189733b is orbiting a star very close to the centre of the triangle. Credit: A. Fujii.

Methane in the atmosphere of a gas giant wouldn’t rank as a surprise — it’s found in abundance in our own Solar System, and can be created by processes that do not require life. Nor does this work in any way diminish the difficulty awaiting us as we move toward studying much smaller worlds. But if Hubble, using its Near Infrared Camera and Multi-Object Spectrometer (NICMOS) can make this catch, platforms like the James Webb Space Telescope should be able to extend our range dramatically. One day the hope is to use a Terrestrial Planet Finder or Darwin-grade mission to break down the light from an Earth-like world, possibly identifying the chemical signature of life.

The Jet Propulsion Laboratory’s Mark Swain notes the significance of the new result:

“These measurements are an important step to our ultimate goal of determining the conditions, such as temperature, pressure, winds, clouds, etc., and the chemistry on planets where life could exist. Infrared spectroscopy is really the key to these studies because it is best matched to detecting molecules.”

Getting the right data in this case meant observing HD 189733b as it made a transit, the light from the primary passing through the planet’s atmosphere, where the constituent gases imprinted their signature on the starlight. The observing team used the NICMOS camera over five contiguous spacecraft orbits. In addition to methane they were able to confirm the earlier identification of water vapor in the planetary atmosphere made by the Spitzer Space Telescope. And HD 189733b did have a bit of a surprise to offer, in the form of more methane than would have been expected from our current model of ‘hot Jupiters.’ Says Giovanna Tinetti (University College, London):

“A sensible explanation is that the Hubble observations were more sensitive to the dark night side of this planet where the atmosphere is slightly colder and the photochemical mechanisms responsible for methane destruction are less efficient than on the day side.”

But where is the carbon monoxide researchers expected to find? HD189733b is some 63 light years away in the constellation Vulpecula, roughly twenty percent more massive than Jupiter and orbiting its star at a tenth of the distance of Mercury from our Sun. Orbiting once every 2.2 Earth days, the planet diminishes the apparent brightness of its star by a scant 2.4 percent, an indication of the precision required in this work. The paper is Swain et al., “Methane present in an extrasolar planet atmosphere,” Nature 452 (March 20, 2008), pp. 296-297 (abstract)

A final thought: Life’s chemistry may still conceal its secrets even when we’re taking reliable spectrographic data from seemingly Earth-like worlds around other stars. Listen to what Marc Kuchner (NASA GSFC) has to say on this point:

“How can you take a spectrum of an extrasolar planet’s atmosphere and know for certain whether there is life or not? There is probably a huge range of atmospheres on extrasolar planets. Some probably have biomarkers of life, but those biosignatures are not a ‘slam-dunk’ for life on those planets. I think life on another planet may not be confirmed unless we go there.”

An interesting thought, given that the time may not be that far off (a few decades, perhaps) when we’ve found a terrestrial-size rocky world around a nearby star — Centauri B comes to mind — and have analyzed its atmosphere. Plants, animals and bacteria produce oxygen, methane and nitrous oxide in abundance on Earth. If we find these out of thermodynamic equilibrium with each other on a Centauri B planet, the probability of life will clearly soar, but what if the biomarkers are harder to interpret? Ambiguity is often the result in science, which is where propulsion engineers may find their opening.