Cassini’s recent pass through the plumes of Enceladus resulted in a number of intriguing finds, perhaps the most interesting of which is the temperature along the ‘tiger stripes.’ These are the fissures from which Enceladus’ famous geysers erupt. Cassini’s Composite Infrared Spectrometer found them to be warm along almost their entire length, reaching no less than minus 93 degrees Celsius (-135 F). The warmest regions correspond to two visible geyser locations. The contrast in temperatures is striking: The differential between these regions and other areas on Enceladus is a whopping 93 degrees Celsius (200 F). 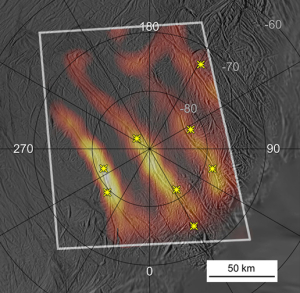 This heat map gives a sense of what we’re dealing with. The brightest fracture, known as Damascus Sulcus and visible at lower left in the image, shows the highest temperatures. In this image, the false color infrared data are superimposed on a grayscale mosaic of the south pole that dates back to the summer of 2005. The map was made at a distance of between 14,000 and 32,000 kilometers starting sixteen minutes after closest approach as the spacecraft receded.

Image: Heat radiating from the entire length of 150 kilometer (95 mile)-long fractures is seen in this best-yet heat map of the active south polar region of Saturn’s ice moon Enceladus. The warmest parts of the fractures tend to lie on locations of the plume jets identified in earlier images, shown in the annotated version with yellow stars. The measurements were obtained by the Cassini spacecraft’s Composite Infrared Spectrometer from the spacecraft’s close flyby of the moon on March 12, 2008. Credit: NASA/JPL/Space Science Institute.

“These spectacular new data will really help us understand what powers the geysers. The surprisingly high temperatures make it more likely that there’s liquid water not far below the surface.”

Surprising indeed, and encouraging, for we’re looking at an Enceladus with unusual warmth and possible liquid water. Moreover, Cassini’s pass through the plumes led to the detection of organic chemicals, a mix reminiscent of cometary materials. The density of volatile gases, water vapor, carbon dioxide and carbon monoxide, along with organic materials both simple and complex, was twenty times what had been expected. 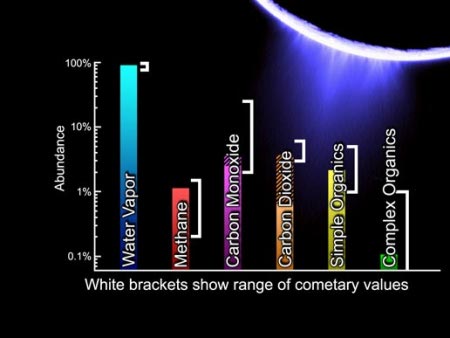 Image: Enceladus’ plume was found to have a comet-like chemistry by Cassini’s Ion and Neutral Mass Spectrometer during its fly-through of the plume on Mar. 12, 2008. Water vapor, methane, carbon monoxide, carbon dioxide, simple organics and complex organics were identified in the plume. The graph shows the chemical constituents in percentage of abundance found in comets compared to those found in Enceladus’ plume. Credit: NASA/JPL/SwRI.

In a NASA feature on the Saturnian moon, Chris McKay (NASA Ames) discusses microbial ecosystems that could be models for life on Enceladus today:

There are three such ecosystems found on Earth that would conceivably be a basis for life on Enceladus. Two are based on methanogens, which belong to an ancient group related to bacteria, called the archaea — the rugged survivalists of bacteria that thrive in harsh environments without oxygen. Deep volcanic rocks along the Columbia River and in Idaho Falls host two of these ecosystems, which pull their energy from the chemical interaction of different rocks. The third ecosystem is powered by the energy produced in the radioactive decay in rocks, and was found deep below the surface in a mine in South Africa.

But if life may be feasible on Enceladus, how would it begin? Organic chemicals, notes McKay, were part of the raw materials from which the moons of Saturn formed. Other ingredients could have arrived on comets or interplanetary dust. Add a heating mechanism — tidal heating is one candidate, assuming an earlier oblong orbit, or earlier tidal relationships with another moon — and you could eventually produce a subsurface aquifer rich in organic materials, what McKay calls a ‘prebiotic soup.’

Every time we look at Enceladus the excitement seems to build, and the next flyby isn’t until August! Another passage through the plumes would certainly add to our data, while it’s clear that Enceladus is also moving up on the interest scale in terms of future missions. A lander that could take plume samples and explore the area near the fissures would be optimal. We can only guess when budget realities might make such a mission possible, but until then the data harvest from our existing orbiter is splendid, with analysis of the organic compounds in the plume and the sources of Enceladus’ energy likely to occupy us for years to come.