Budding astrobiologists should be thinking about the significance of red dwarf stars as they approach their careers. Let’s say, as pure speculation, that one out of every thousand stars in class M has a planet in the habitable zone. That works out to 75 million potentially habitable planets around these stars in our galaxy alone. 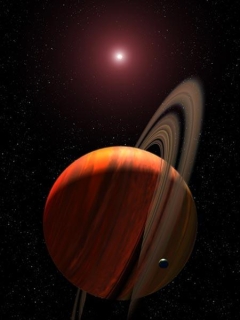 Note the assumptions I’m making. First, I peg M dwarfs at 75 percent of the galactic population. That figure is widely in use and I’ve just run across it again in a new paper by Paul Shankland (US Naval Observatory), David Blank (James Cook University, Australia) and colleagues, about which more in a moment. Another assumption: That the Milky Way holds about one hundred billion stars. That’s low-balling the number, I think, because estimates seem to start at that figure and go up to four or five times as high. So my 75 million potentially habitable planets, while just a guess, may not be totally off the wall.

Now assume one out of every thousand G-class stars like the Sun has a planet in the habitable zone. Using the same assumption for stellar population in the galaxy and figuring that G-class stars represent approximately three percent of the stars in the Milky Way, we wind up with three million potentially habitable planets around them. Clearly those of us who dwell on odd, rotating planets in which there would be alternating times of light and darkness at the surface (!) and all too little of that helpful solar flare activity are very much in the minority.

We do slightly better with K stars (think Centauri B, for example, or Epsilon Eridani). Somewhat cooler than the Sun, these orange stars are more plentiful than G-class, making up about 15 percent of the galactic population. That leaves us, again using the one in a thousand assumption, with 15 million potentially habitable planets. K stars help, but even when we add them to the G-class, we wind up with substantially fewer habitable planets than around M-class dwarfs.

But note another assumption I’ve made above, one that could stand some scrutiny. I’ve set up one in a thousand as a figure for habitable planet occurrence without any reference to how planets form in the first place. A key question is whether we can assume roughly similar methods of planet formation around M dwarfs as around G stars and the other stellar types. We’re studying models like core accretion and gravitational instability as we develop consistent theories for all this, but our knowledge of what goes on around M dwarfs remains sparse.

What do we need to move forward on these questions? Aside from a lot more planetary detections around these stars, we need to learn more about dust disks around M dwarfs. It’s an interesting fact that a 2007 search around 123 late-type red dwarfs using the Spitzer Space Telescope produced no new detections. That leaves us with only a few M dwarf dust disks, the one around AU Microscopii being particularly well-resolved. We’ve also found them around Gl 842.2 and Gl 182.

Where to look for the next dust disk as we relate M dwarf planet formation to what we see happening around stars in other stellar classifications? 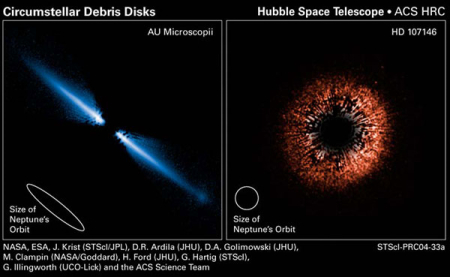 Image: Dust disks around the M dwarf AU Microscopii (left) and the G2 star HD 107146. 32 light years away, AU Microscopii is only twelve million years old. Note the gaps in the disk in both images, where planets may have cleared a path. Credit: G. Illingworth (UCO-Lick)/ACS Science Team.

The devil, it’s often said, is in the details. A friend, exasperated with my enthusiasm for tiny red stars, commented recently that he was tired of all the painstaking numbers — he simply wanted to know whether there was another habitable planet nearby or not. Ah, but it’s just such painstaking numbers that will tell us the tale. We would have no planetary detections at all without gigabytes of slowly accumulating data, from which the signature of distant worlds is finally drawn. A better statement might be, the truth is in the details. Painstaking as they might be, details are the stuff of discovery.

And sometimes even negative results are revealing. The nearby red dwarf Gliese 876, a fascinating, multi-planet system, has shown no evidence of a dust disk, as discussed in the above-mentioned Shankland/Blank paper. This team used the Very Large Array (VLA) and Australia Telescope Compact Array (ATCA) to search for microwave emissions from such a disk. What we learn is not so much that Gl 876 has no disk whatsoever, but that if there is one, it has to fit within a newly tightened series of constraints. From the paper:

…a negative detection (as is the result here) suggests that a thin dust mass could still exist about Gl 876 if the dust density were below the detection threshold of the individual VLA or ATCA resolution-per-pixel, or the overall upper mass limit. The yet-poorly understood dust density, temperature, spectral index, opacity and optical thinness muddies our understanding of the mechanisms at play, and inclination would be a factor in each of these. Still, there are other possibilities for our null result. Another may be that the formation and evolution of systems (disks and planets) is different in M dwarfs. At the least, any unexpanded composition in the system would lead to misunderstood opacities, albedos, radii, or black body behavior.

Flag that latter possibility: The formation and evolution of systems may be different around M dwarfs. No one can say at this point that it is or isn’t, but the fact that we don’t know reminds us that to this date we have only six M dwarfs with known planetary systems, and very little information about the disks that give rise to planets in the first place. Broadening that information may involve using different instrumentation, which should be turned upon the known M dwarf planets. Note this comment (internal references deleted for brevity):

It is also worth mentioning that because of the low luminosity of M dwarfs… that leads to cooler dust about them, sub-millimeter or millimeter telescopes may be more sensitive than mid-infrared ones in detecting such planet-associated-disks. We would encourage observations at these wavelengths be explored further. In particular, we recommend that the six M dwarfs found with planets so far be comprehensively checked for dust, to include Gl 876 (with greater sensitivity than us), Gl 436, Gl 674. Gl 849, Gl 581, and GJ 317. Understanding the dust in such planet-bearing systems… may be a key not just to making a ﬁrst exo-Earth detection, but will more importantly offer a broader understanding of planets and their formation about the populous M-type stars.

By putting limits on the amount of debris that might be found in the Gl 876 system, these astronomers have also given a nudge to the theory that close-in gas giants may have an effect on clearing out a dust disk. But this is one among a range of possibilities discussed in a paper that advances our knowledge of what is possible around one nearby red dwarf and its implications for planets elsewhere. The paper is Shankland, Blank et al., “Further Constraints on the Presence of a Debris Disk in the Multiplanet System Gliese 876,” accepted by the Astronomical Journal (abstract).