Calcium aluminum-rich inclusions (CAIs) are bright, ancient materials found in carbonaceous chondrite meteorites. Their story in terms of modern astronomy goes back to February 8, 1969, with the fall of the so-called Allende meteorite, the largest carbonaceous chondrite yet discovered. This meteorite, which fell over Chihuahua, Mexico, was found to be rich in CAIs, seen as inclusions of up to several centimeters in size. The link between CAIs and the early Solar System was soon established. 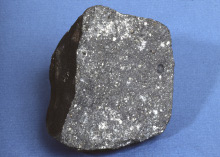 Carbonaceous chondrites are meteorites with high levels of water and organic compounds. the presence of which leads scientists to believe that they are relatively pristine examples of material from the birth of the Solar System. They are also known for the round grains known as chondrules. Now a team of astronomers has found asteroids likewise enriched in calcium and aluminum, and hence considered to be among the oldest yet identified. Says Tim McCoy (National Museum of Natural History):

“I find it amazing that it took us nearly 40 years to collect spectra of these [CAI-rich] objects and that those spectra would now initiate another revolution, pointing us to the asteroids that record this earliest stage in the history of our Solar System.”

Image: Allende, like many carbonaceous chondrites, contains calcium-aluminum-rich inclusions (CAIs). Unlike chondrules, which are round and composed mostly of silicate minerals like olivine and pyroxene, CAIs are predominantly white to light gray in color, irregularly shaped, and rich in refractory (high- temperature) minerals like melilite and spinel. They are believed to pre-date chondrules by at least 2 million years. Credit: D. Ball/Center for Meteorite Studies (ASU).

Calcium and aluminum would have been among the first materials to condense into solid particles as the gasses of the early solar nebula began to cool. Largely unchanged since they formed some 4.55 billion years ago, these asteroids actually predate the oldest meteorites found. Jessica Sunshine (University of Maryland), who led the scientific team, makes a strong case:

“Several CAI-rich asteroids have been identified that contain 2-3 times more CAI material than any known meteorite. Thus it appears ancient asteroids have indeed survived, and we know where they are.”

The team used the NASA Infrared Telescope Facility in Hawaii to run spectral analyses showing the distinctive signature of CAIs on asteroid surfaces. All of which is useful targeting information for future space missions, as a sample return from such an object would offer material laden with information about our system’s earliest era. The case for asteroid missions continues to be bolstered, both from the obvious scientific perspective on display here and from the point of view of planetary security. The two are hardly exclusive — what we learn from a visit to a near-Earth object will tune up our technology for main belt operations as well as helping us to assess impact threats.