Long before the first exoplanets were found, one speculation about our own Solar System was that a passing star had disrupted the solar nebula so as to promote the formation of planets. We now know that planets form in many ways, but it’s interesting to see that HL Tau, a star discussed yesterday at the Royal Astronomical Society meeting in Belfast, may have been influenced by a recent close pass by XZ Tau, another young star nearby. Did this ‘flyby’ disrupt the circumstellar disk around HL Tau, helping to form a proto-planet that has now been observed?

Whatever the case, we do seem to have interesting processes at work around HL Tau. The newly discovered proto-planet is thought to be only one percent of the age of a planet found last year around TW Hydrae, a world ten times the mass of Jupiter that was once the youngest planet yet detected. That one orbited inside the inner hole of a pronounced circumstellar disk. HL Tau b remains little more than a bright clump within its dusty disk, but one that has undergone extensive computer modeling.

Jane Greaves (University of St Andrews) presented the team’s findings on this unusual object at the RAS session. We’re apparently dealing with the earliest stage of planetary formation:

“We see a distinct orbiting ball of gas and dust, which is exactly how a very young protoplanet should look. In the future, we would expect this to condense out into a gas giant planet like a massive version of Jupiter. The protoplanet is about 14 times as massive as Jupiter and is about twice as far from HL Tau as Neptune is from our Sun.” 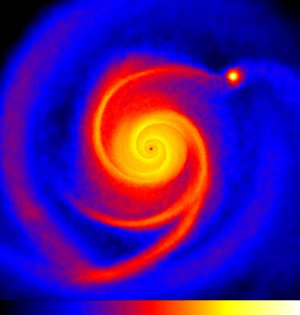 HL Tau itself is a youngster, perhaps no more than 100,000 years old. Located in the direction of the constellation Taurus and some 520 light years from Earth, the star’s unusually bright circumstellar disk has been studied before, its bright clump noted, but it took the Very Large Array and the UK’s MERLIN array of radio telescopes to confirm the presence of rocky materials (as opposed to hot gases) in the early stages of planet formation. Computer simulations at the University of Edinburgh suggest that the mechanism at work is gravitational instability in a disk that is half as massive as the star itself, allowing individual structures to form.

Image: HL Tau and its surrounding disk as seen in computer simulation. In the model the dense clump (seen at top right) forms with a mass of about 8 times that of Jupiter at a distance from the star about 75 times that from the Earth to the Sun. Click on the image for a movie showing the growth of this disk (Credit: Greaves, Richards, Rice & Muxlow 2008).

Now we’re back in the bidding war between gravitational instability and core accretion as models for planet formation. The latter suggests that planetary cores form as planetesimals gradually clump together until reaching a mass sufficient to capture gas from the surrounding materials. The two do not, of course, have to be mutually exclusive, with probable examples of gravitational instability in particular cases not ruling out core accretion in other settings. But the more we study young systems like this, the more we will learn about the respective merits of each theory.