Keep your eye on a project in the Canary Islands called the New Earths Facility. Using a laser measuring device now being tuned up for the job, scientists intend to continue the hunt for terrestrial worlds with a greater than ever chance of success. Called an astro-comb, the device brings far greater precision to our existing Doppler techniques for finding exoplanets. In fact, early reports suggest it may increase the resolution of these methods by as much as one hundred times, making the detection of an Earth-like world in an orbit similar to ours feasible.

Now we’re getting into interesting territory indeed, not only in terms of planetary detections themselves but synergies with the ambitious Kepler mission, to be launched in 2009. Read on. 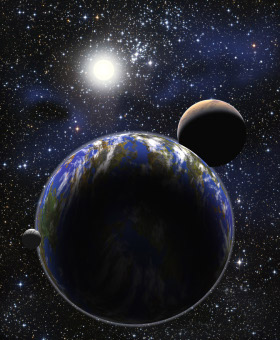 Studying the Doppler shift of distant starlight has already achieved a remarkable precision, capable of finding planets down to about five Earth masses in orbits as far from the star as Mercury. But the farther we get from the star, the trickier these observations become. The same is true for planetary size. Larger worlds are much easier to find, making finding planets as small as the Earth in an orbit similar to our own a challenge. The astro-comb ought to make a difference.

Image: CfA astronomers are developing a new device that may be the first to spot Earth-like planets, like the hypothetical world with two moons shown in this artist’s concept. The “astro-comb” uses a laser to provide an ultrasensitive way of measuring a distant star’s wobbling motion, which is induced by an orbiting planet. Credit: David A. Aguilar (CfA).

Pulses of laser light linked to an atomic clock create a standard against which the astro-comb can measure the incoming starlight. The technology is based on so-called ‘laser combs’ that have been in use for creating precision clocks. Such a comb creates spikes of laser light evenly spaced in wavelength — hence the comb metaphor — that can be projected into a spectrograph. Ronald Walsworth (Smithsonian Astrophysical Observatory) added a filtering device to the laser comb that spreads the ‘teeth’ of the comb to make the technology workable for astrophysics.

If the device proves out, numerous applications should be possible beyond the planet hunt. The paper on this work, for example, talks about measuring the decelerating expansion of the early universe (as opposed to what is now believed to be the renewed acceleration of same in a much later era). But planets, Earth-like ones at that, are what inevitably come to mind, taking pride of place in the paper on this work:

Beyond our ﬁrst demonstration, astro-combs should enable many observations that have previously been considered technically unachievable. One example is the search for a 1-Earth-mass planet in an Earth-like orbit around a Sun-like star, which requires a sensitivity of 5 cm s−1 and stability on at least a 1-year timescale.

Deploying an astro-comb at the William Herschel Observatory in the Canaries should boost the powers of the spectrograph to be located there under the auspices of the Harvard Origins of Life Initiative and the Geneva Observatory to the point where that instrument can find Earth-like planets. Known as the HARPS-NEF (High-Accuracy Radial-velocity Planet Searcher of the New Earths Facility) spectrograph, the instrument is similar to the HARPS spectrograph in Chile.

Interestingly, the Canaries facility, its instrumentation augmented by an astro-comb, offers useful support to the upcoming Kepler mission. Kepler will go after planetary transits, looking at 100,000 solar-type dwarf stars in a single field of view for four years. Kepler’s problem: The space-based observatory will be able to detect Earth-sized planets but unable to measure their mass because of the tiny Doppler values they generate. Current models for terrestrial planets suggest that the combination of mass and radius information will help us tell the difference between rocky planets and water worlds.

HARPS-NEF, especially as boosted by the astro-comb, should help make this possible. A prototype astro-comb will be tested this summer at the Mount Hopkins Observatory in Arizona, with improvements feeding into the Canaries project. The paper is Chih-Hao Li et al., “A laser frequency comb that enables radial velocity measurements with a precision of 1 cm s-1,” Nature 452 (3 April 2008), pp. 610-612 (available online).