John Wheeler and the Umpires

Is observation critical to existence? Niels Bohr believed that it was the collapse of the wave function that gave particles like electrons their distinct reality. John Wheeler, who knew and worked with the great figures of quantum mechanics, summarized the gap between that point of view and Einstein’s by quoting three baseball umpires:

Michio Kaku reports this story in his book Parallel Worlds, noting this:

“To Wheeler, the second umpire is Einstein,who believed there was an absolute reality outside human experience. Einstein called this ‘objective reality,’ the idea that objects can exist in definite states without human intervention. The third umpire is Bohr, who argued that reality existed only after an observation was made.” 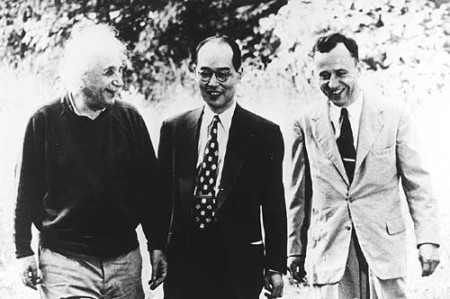 Out of such conundrums John Wheeler made a career richly summarized in this New York Times obituary. I send you there for the details, from general relativity to black holes, but do want to preserve this quote:

“If there’s one thing in physics I feel more responsible for than any other, it’s this perception of how everything fits together. I like to think of myself as having a sense of judgment. I’m willing to go anywhere, talk to anybody, ask any question that will make headway.

“I confess to being an optimist about things, especially about someday being able to understand how things are put together. So many young people are forced to specialize in one line or another that a young person can’t afford to try and cover this waterfront — only an old fogy who can afford to make a fool of himself.