56 light years from Earth, the star Iota Horologii is a member of the ‘Hyades stream,’ a number of stars moving in a similar direction with respect to the rest of the galaxy. It’s also an exoplanet host star, known to have a planet twice the mass of Jupiter in a 320-day orbit. The two factors — the position of the star within the stream and the planet that accompanies it — play into an unusual application of asteroseismology, the study of the sound waves that move through a star. 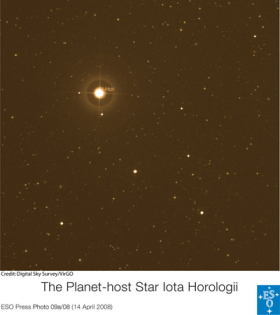 I want to note this work particularly because it has a bearing on planet formation, about which the more we learn the better as we continue the hunt for exoplanets. But let’s pause on asteroseismology itself. You may recall that using this technique for studying the interiors of stars is one of the purposes of the COROT mission, the other being the detection of planetary transits. Asteroseismology is invariably explained with musical metaphors, likening the sound moving within a star to the ringing of a bell.

Just how the bell rings can tell us much about the star. In the case of Iota Horologii, the team studying the star (led by Sylvie Vauclair of the University of Toulouse) was able to pick out the signature of 25 separate waves, as if the ringing bell had produced 25 ‘notes.’ Out of that data come measurements that are quite precise. Iota Horologii is now believed to have a mass 1.25 times that of the Sun, with a temperature of 6150 K and an age of 625 million years.

Image: Using HARPS on ESO’s 3.6-m telescope at La Silla, astronomers were able to study in great detail the star Iota Horologii, known to harbour a giant planet, and make a very precise portrait of it: its temperature is 6150 K, its mass is 1.25 times that of the Sun, and its age is 625 million years. Moreover, the star is found to be more metal-rich than the Sun by about 50%. This means the star must have drifted from the Hyades cluster where it formed. Credit: Digital Sky Survey/VirGO.

And note this: The star is about fifty percent more metal-rich than the Sun. That’s useful information because it tell us that Iota Horologii has the same metal abundance and age as the Hyades cluster, located 151 light years away. Note the distance — the star has drifted about 130 light years from its apparent birthplace, although it continues to move in the general direction of the cluster. The paper on this work makes the claim that Iota Horologii is one of the 15 percent of stars in the Hyades stream that share this origin, the others being simply “…field-like stars sharing the Hyades galactic velocities because of galactic dynamical effects.”

The high metal content of this star is significant in its own right. Metals in astrophysical terms are elements higher than hydrogen and helium, and the question of how they play into planetary development remains a thorny one. If you take an average of the stars known to have exoplanets, they turn out to be far more laden with metals than our own Sun. Is this because the clouds that gave birth to these stars already contained high levels of metals, or because planets and planetesimals accrete around these stars early on, increasing their metallicity?

This is a testable issue, for if the metals come from the original cloud, then they extend throughout the star, whereas if they’re the result of accretion, only the star’s outer layers should show high metal levels. You can see how asteroseismology ties in to all this. The paper summarizes the result, noting that this is the first time these methods have been able to deliver unambiguous results, despite studies of the star Mu Arae, which was observed with the same HARPS spectrograph:

In the case of ι Hor, the question may be approached in a different way. Asteroseismology leads to the conclusion that this star was evaporated from the primordial Hyades cluster, sharing the same age, helium abundance and overmetallicity. This is one proof that the origin of this overmetallicity is primordial, from the original cloud. This result has important consequences for the formation and subsequent evolution of galactic clusters and the theories of exoplanets formation and migration.

Or as Vauclair herself puts it in this ESO news release:

What we need, of course, are many, many cases as we continue to investigate how planets form. As that work continues, expect asteroseismology to play a significant role. The idea that we can use a spectrograph to study the motions on stellar surfaces and translate that information into solid data about the interior of stars — age, helium abundance, gravity, mass — is striking, and in this case led to an identification of origins that feeds into broader exoplanet questions. As the paper summarizes the issue:

This work shows how powerful asteroseismology can be in deriving the characteristic parameters of a star with the help of spectroscopic analysis, but ﬁnally obtaining much more precise results than with spectroscopy alone.

The paper is Vauclair et al., “The exoplanet-host star iota Horologii: an evaporated member of the primordial Hyades cluster,” accepted by Astronomy and Astrophysics and available online.