What happens to potentially habitable planets when a gas giant swings through the neighborhood? It’s a pertinent question when you consider the surprises that ‘hot Jupiters’ have given us. 22 percent of known extrasolar planets show an orbital radius of less than 0.1 AU, and 16 percent are located within 0.05 AU of their host star. That’s a surprise given the assumption that these gas giant planets must form much further out in their systems, but it can be explained by inward migration of the giant planet, a process under much study that is generally thought to be caused by interactions with the protoplanetary disk. 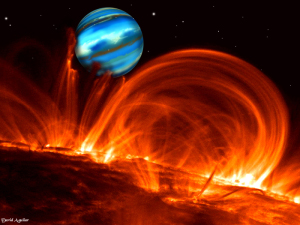 Such a migration would seem to spell trouble for planets already orbiting closer to the star, leading some to believe that systems with hot Jupiters are unlikely homes for living worlds. But recent simulations of the growth of such systems make it clear that a hot Jupiter isn’t necessarily a deal-breaker for habitable worlds. Are we going to have to add such systems into our target lists for future terrestrial planet finder missions?

Image: A hot Jupiter seared by its star. Could terrestrial planets survive the migration of such a planet inward from its place of origin in the outer system? Credit: Harvard-Smithsonian Center for Astrophysics.

Sean Raymond (University of Colorado), Avi Mandell and Steinn Sigurðsson (the latter two from the University of Pennsylvania) have been modeling circumstellar disks, beginning with a disk containing seventeen Earth masses of rocky/icy material divided between 80 ‘planetary embryos’ and 1200 planetesimals. The inner disk was modeled as iron-rich and water-poor, the outer as water-rich and iron-poor. These are values that are much like the Solar System, where it is believed that comets are as much as half water ice, and asteroids outside 2.5 AU contain large amounts of water.

Given these initial disk conditions, the team ran a Jupiter-mass planet from 5.2 AU in to 0.25 AU over a period of 100,000 years, studying the effects on planetary formation in the following 200 million years under a variety of scenarios. The first result is eye catching: A lot of things start to happen inside the orbit of the migrating giant planet, where planetesimals and embryos are drawn (‘shepherded’) by motion resonances and gas drag. ‘Hot Earths’ with masses up to five times that of Earth form relatively quickly.

Then something equally interesting occurs. Materials that have been scattered outward by the giant planet’s migration begin to have their orbits re-circularized by gas drag from the disk. Planetesimals outside the orbit of the ‘hot Jupiter’ begin to deliver materials including large amounts of water to growing terrestrial planets. Note this (internal references omitted for brevity):

Planets formed in the Habitable Zone in a signiﬁcant fraction of our simulations. These planets have masses and orbits similar to those seen in previous simulations including only outer giant planets… However, Habitable Zone planets in systems with close-in giant planets tend to accrete a much larger amount of water than those in systems with only outer giant planets… The reason for these high water contents is twofold: 1) strong radial mixing is induced by the giant planet’s migration, and 2) in-spiraling icy planetesimals are easily accreted by planets in the terrestrial zone. Although we have not taken water depletion into account, these planets contain about twenty times as much water as those formed in similar outer giant planet simulations… These planets are likely to be “water worlds”, covered in kilometers-deep global oceans…

Interesting, no? We see the possibility of Earth-like planets (along with ‘hot Earths’ inside the gas giant’s orbit) that are water-rich, in some cases containing more than 100 times the water content of Earth, and low in iron (the iron content being diluted by outer, water-rich material). The influx of ices via outer planetesimals is unimpeded by the kind of scattering that Jupiter provides in our Solar System.

Out of all this comes a rough limit on the orbital distance of the inner giant planet that would allow the formation of terrestrial planets in the habitable zone: A terrestrial planet just inside the outer edge of the zone at 1.5 AU would demand the hot Jupiter’s orbit to be inside about 0.5 AU, although up to 0.7 AU may still be feasible. And when the researchers applied this limit to the known extrasolar giant planets, they found that 65 out of 178 of the systems in their sample permitted an Earth-like planet of at least 0.3 Earth masses or more to form in the habitable zone.

In other words, some of the known ‘hot Jupiter’ systems may turn out to yield potentially habitable planets after all, a key thought when drawing up target lists for next-generation planet-finder missions. “Our results suggest that terrestrial planets can coexist with both close-in giant planets and giant planets in outer orbits,” write the authors, “expanding the range of planetary systems that should be searched with these upcoming missions.” The paper is Mandell, Raymond and Sigurðsson, “Formation of Earth-like Planets During and After Giant Planet Migration,” Astrophysical Journal Vol. 660, Issue 1 (May, 2007), pp. 823-844 (abstract). Citation amended from the original as per the comment below.

Next post: A ‘Hot Jupiter’ in Our Solar System?