A ‘Hot Jupiter’ in Our Solar System?

Serendipity is a wondrous thing. Start writing about the early history of the Solar System, as I intended to do yesterday, and you wind up discussing ‘hot Jupiters’ around other stars. But there actually is a bridge between the two concepts, and it comes in the form of a question. If we find gas giants in scorchingly hot orbits around other stars, why was there no hot Jupiter in our own Solar System? Or was there? That question was what originally led me to the paper by Avi Mandell, Sean Raymond and Stein Sigurðsson that occupied yesterday’s post. 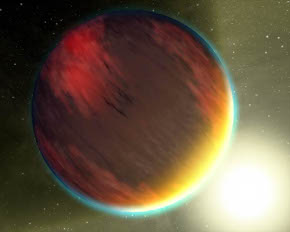 For in their analysis of how giant planets migrate through an early planetary system, wreaking havoc on newly forming worlds but also scattering them interestingly throughout nearby space, these researchers paused to examine the implications of these studies for our own system. Having demonstrated through their simulations that the migration of a gas giant through an inner system may be common, and that systems that experience it often form terrestrial worlds, why rule out earlier generations of giant planets right here in Sol space?

Image: A ‘hot Jupiter’ moves breathtakingly close to its star. Found around a number of other stars, could such a world have once moved through our own Solar System? Credit: NASA/JPL-Caltech.

If such were the case, then the natural follow-up is to ask whether it may be possible to find the signature of early planetary scattering in the system today. One problem with that concept is that although the mixing of large bodies that would occur during migration should leave traces in the makeup of elements found in the final system, this signature would be obscured by other kinds of mixing. Thus the authors give up on the idea of tracing it in the inner Solar System, saying in their paper:

…radial mixing of dust and smaller bodies is also thought to occur through a variety of other processes in the planet formation region besides planetary scattering…, and it is clear from the ﬁnal abundances of planets in our simulations and others that any signature of the scattering of massive bodies early in the formation history will be quickly erased through accretion in the inner system due to continued mixing.

But the further we move from the Sun, the more interesting things get. Here we’ve dealing with lower densities of solids and gases and longer time-frames, with accretion and other factors less likely to obscure what may be evidence of planetary movements in the early system. Finding comets whose orbits make them appear to be Oort Cloud objects, but whose physical characteristics suggest asteroids, could provide evidence for the scattering of inner disk objects by a migrating gas giant.

Even better would be an object in the right place, one made of materials showing signs of high temperature origins. From the paper:

A more conclusive sign of giant planet migration would be a classical KBO with a composition primarily composed of refractory materials; this would imply the re-circularization of a scattered inner-disk object, which would most likely only be possible in the presence of damping by signiﬁcant amounts of gas or dust for long timescales.

So there’s a lively vector for another research project, examining objects from the Edgeworth/Kuiper belt and the Oort Cloud for evidence of early planetary migration. It would take a lot of work and much more information about the outer system than we currently have before we could remotely conclude that a hot Jupiter once perturbed our own neighborhood. But the idea that extrasolar systems with these planets are necessarily of a different order than our own Solar System may one day be shown to be false. We may find that hot Jupiters are not uncommon as a system with terrestrial worlds continues its development.