Hawking and the Long Result

Sometimes it’s hard to believe that Stephen Hawking is only sixty-six. Not just because of his indomitable fight against Lou Gehrig’s disease, which is a story in its own right, but because his position at the summit of modern physics has kept him in the public eye for an exceedingly long time. Now, in a speech commemorating the fiftieth anniversary of NASA, Hawking has taken aim at the question of why space matters. And it’s not surprising that this Star Trek fan quoted his favorite show.

“If the human race is to continue for another million years, we will have to boldly go where no one has gone before … It will not solve any of our immediate problems on planet Earth, but it will give us a new perspective on them and… Hopefully, it will unite us to face a common challenge.”

But of course, that question of solving our immediate problems on Earth is what is often subject to debate. Although the space budget is usually overestimated (a recent conversation illustrated this, a friend citing the ‘trillions we’re spending on space’) Hawking notes that you could increase the international space budget twenty times and still be talking about no more than 0.25 percent of the collective gross domestic product (GDP). That’s a quarter of a percent of the world’s financial resources to potentially save the species. 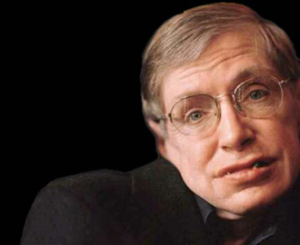 Some of us point to the threat of impacts from near Earth objects (NEOs) in this debate, but Hawking has in the past mentioned the dangers of climate change and nuclear war as reasons for expanding first to other planets and eventually to other solar systems. He views the current NASA goal of a return to the Moon and a trip to Mars as steps within this broader vision, one that includes work on interstellar propulsion that may pay off on a time frame of from two to five hundred years.

Image: Stephen Hawking’s vision takes us out a good five hundred years. Do we have the cultural commitment to apply consistent effort over such time frames? Our future in interstellar space may depend upon the answer. Credit: British Council.

Hawking spoke at George Washington University on Monday, where the bulk of the audience may have found a two to five-hundred year time frame uncomfortable. After all, we’re not used to thinking in such terms, and in an era that demands fast turn-arounds, wouldn’t it be grand to simply come up with a star drive tomorrow? Indeed, do we have the patience to embark on a project that might last five centuries, whose outcome will always remain in doubt, and whose funding will have to be continually extracted from reluctant governments or, more likely, drawn from the philanthropic donations of a small number of visionaries?

A quick solution to star drives is unlikely. But Stephen Hawking is himself an example of the power of the long-term even as it applies to daily life. Speaking last week at Caltech (again via a pre-recorded talk), Hawking answered questions that had been submitted to him in advance. There were only five questions, but according to Kip Thorne, a close friend and upcoming physics legend in his own right, it took Hawking several days to program his answers. Thorne describes him as “about the most patient, stubborn man I know.” Patience and stubborness. Those are the traits that may get us to the stars, markers of a core belief in the long haul.

Next post: Electric Sails: Leave the Propellant at Home

Previous post: A ‘Hot Jupiter’ in Our Solar System?