Boosting the sensitivity of our exoplanet search tools by a hundredfold is no small matter, yet that’s just what optical frequency combs, when implemented with an ultrafast laser, may be able to do. A frequency comb is created by a laser that generates short, equally spaced pulses of light. ‘Locking’ the individual frequencies — keeping them in phase with each other — is essential, as is producing pulses that are no more than a few million billionths of a second long. The image below explains the name, the graph giving the impression of nothing more than a fine-toothed comb (and see this National Institute of Standards and Technology backgrounder for further details on how these combs work). 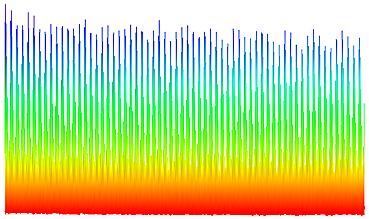 We’ve looked at laser combs before, in particular in the work being performed at the Harvard Smithsonian Center for Astrophysics, which is involved in the deployment of such a comb at the William Herschel Observatory in the Canary Islands. The resultant instrument, called the HARPS-NEF (High-Accuracy Radial-velocity Planet Searcher of the New Earths Facility) spectrograph, should be useful in studying Earth-sized planets detected by the Kepler mission. The spikes on the comb can be used to measure the frequency of other light sources to a high degree of precision, useful to everything from the exoplanet hunt to making more accurate global positioning measurements.

Image: Experimental data from a NIST “gap-toothed” frequency comb that are false colored to indicate the range from low power (red) to high power (blue). The comb is specially designed for astronomy. Each “tooth” is a precisely known frequency, and the teeth are widely separated (by 20 gigahertz) in comparison to a standard comb. Credit: M. Kirchner & S. Diddams/NIST.

Now scientists at the University of Konstanz in Germany and the National Institute of Standards and Technology (NIST) have pushed a laser into record territory with a combination of high speed, short pulses and high average power. The new laser produces pulses ten times more often than a standard NIST frequency comb, creating shorter pulses than other lasers operating at comparable speeds. This is significant because the shorter the laser pulses, the wider the spacing between the ‘teeth’ of the comb. While standard combs use teeth too closely spaced for precise exoplanetary work, an ultrafast laser in this range offers the potential for more precise measurements of distant light.

The interest in laser comb technologies stems from the need to improve our Doppler methods of planet detection. Tiny shifts in the frequency of a star’s light as measured on a spectrograph tell astronomers about the presence of an otherwise unseen planet around a star. The trick is to measure those shifts with ever increasing detail, an area in which frequency combs hold out rich promise. The shifts induced by an Earth-like planet — equivalent to a wobble of only a few centimeters per second — are far beyond the capabilities of today’s instruments, which are limited to about one meter per second.

No wonder, then, that laser combs are under study at a widening number of institutions, a list that also includes the Max-Planck Institute for Quantum Optics. The new ultrafast laser is one way to push the envelope. Another is to spread the ‘teeth’ of the comb using other methods. The above mentioned CfA work pursues these, and such techniques are also under investigation by the NIST group and Steve Osterman (University of Colorado, Boulder), who are working with sets of mirrors to eliminate periodic blocks of teeth to create a ruler that should be more than adequate for such minute planetary detections.