Monster Flare on Nearby Red Dwarf

From the standpoint of planetary detections, the small red stars called M dwarfs are all but ideal. Their size is an advantage because radial velocity and transit methods should find it easier to pull the signature of smaller planets out of the statistical noise. Not so long ago, that wouldn’t have seemed important because the search for terrestrial worlds seemed confined to G- and K-class stars not too different from our Sun. But more and more theory is piling up as to why a terrestrial-sized planet in the habitable zone of an M dwarf could harbor life.

So these are important stars, especially when you add in the fact that they account for 75 percent or so of all the stars in the Milky Way (that statistic is admittedly subject to change as we learn more about other stars, especially brown dwarfs). And that makes the recent flare on EV Lacertae quite interesting. Some sixteen light years from Earth, the star is young (300 million years), dim (shining with one percent of Sol’s light) and small (its mass and diameter being a third that of the Sun). And although far too dim to pick out with the naked eye under normal circumstances, the recent monster flare it emited would have made it easy to see. 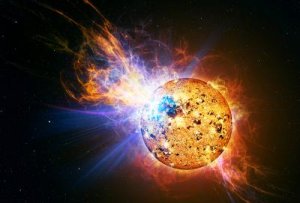 Once again we can thank the Swift satellite for the detection. Although intended to hunt gamma ray bursts (GRBs), Swift often does double duty, as in the recent case of a supernova caught just as it exploded. When the satellite detected the EV Lacertae flare, detailed measurements followed. The flare was thousands of times stronger than solar flares in our own system, of a magnitude that Rachel Olsten (NASA GSFC) calls “unprecedented.” Osten adds: “This star has a record of producing flares, but this one takes the cake.”

So now we are developing the ability to watch flares on other stars as they develop, with the help of Swift and other space-based resources like Chandra and XMM-Newton. That’s useful data as we ponder life’s chances around M dwarfs, where intense magnetic activity can generate flares like this one, capable of damaging a planetary atmosphere. This seems to be the thorniest issue of all, for although we can develop plausible scenarios for habitable climates on such worlds, their sheer proximity to their parent star could make frequent flares an evolutionary wildcard, if not prohibiting the development of life altogether. The range of flare activity possible on M dwarfs — some are far more benign than others — should be a factor as we fine-tune our target lists for future space-based observatories.