All Eyes on Mars 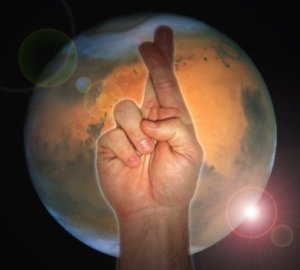 I usually point readers to articles on interstellar issues when the weekly Carnival of Space comes out. But this time, with the polar regions of Mars on everyone’s mind, I’ll focus instead on the Red Planet. Todd Flowerday, who hosts the current Carnival at his Catholic Sensibility site, obviously shares my predilection. Todd’s been following space issues on his blog for quite some time and is a long-term correspondent, so it’s good to see him involved with the Carnival. He leads the parade this week with Cumbrian Sky‘s helpful compilation of information and links related to the flight of the Phoenix. Today, of course, is the big day.

We can all, I think, understand the apprehension and anticipation of Cumbrian Sky‘s post, as so well conveyed in this passage:

…during the landing itself I’ll be watching TWO monitors, not just one; my laptop is going to be… displaying the amazing real-time JPL animation/simulation of Phoenix’s Entry, Descent and Landing. I’ll start that playing at the appropriate time, and that will allow me to imagine I’m actually flying alongside Phoenix in a “chase plane” as she drops, screaming, through the thin Martian atmosphere, counting off the minutes then seconds then moments until landing… If I feel nervous now, how am I going to feel on Sunday night, when we’re so close to Mars after all the waiting? What kind of a state are my guts going to be in as thoughts of how many ways the landing can go wrong run through my head? I’m going to be an absolute nervous wreck!!

I’ve poached Stuart’s illustration to use in this post because it’s so evocative, especially for those who recall the last attempt to land at a Martian pole. Be sure to run through Cumbrian Sky‘s list of links to make sure you have what you need for the upcoming event. I also want to point you to Emily Lakdawalla’s post on the search for the missing Mars Polar Lander via imagery from orbit, including how previous landing sites have looked to the Mars Reconnaissance Orbiter’s HiRISE camera. This is interesting stuff, for as Emily notes, “Mars Polar Lander is the missing lander whose crash site is most narrowly constrained, so the search requires a manageable number of HiRISE images.” Volunteer searchers can help out with this investigation; contact Emily for more.