I recently wrote about EPOXI, the dual-purpose extended mission being flown by the Deep Impact spacecraft. Yes, this is the same spacecraft that delivered an impactor to comet Tempel 1 with such spectacular results back in 2005. The vehicle now proceeds to a flyby of comet Hartley 2, but along the way a second extended mission has been coaxed out of it, this one targeting several known transiting planets in a search for signs of undiscovered worlds in those same systems. The mission will also look for possible moons or rings around the giant planets already discovered.

Another goal: To study the Earth, by way of calibrating the kind of ‘pale blue dot’ imagery a future terrestrial planet finder might see. In fact, observations taking place this very day should be helpful because the Moon will ‘transit’ the Earth from the spacecraft’s perspective.

And yes, the nomenclature is confusing, but acronyms are the name of the game in space operations. EPOXI is actually a conflation of two other acronyms: DIXI is the Hartley 2 mission ((Deep Impact Extended Investigation), while the extrasolar observations operate under the name EPOCh (Extrasolar Planet Observation and Characterization). 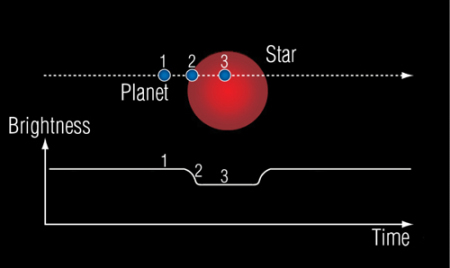 Image: During the EPOCh phase, the spacecraft will observe known transiting planets. This graphic shows approximately what we expect to see as the planet begins to cross in front of its parent star and how the light coming from that star will slightly lessen because the planet is blocking a little bit of the light. The details of the light curve — how deep the dip is, how wide, how steep the drop off — reveal subtle clues about the planet. Credit: NASA/JPL-Caltech/UMD/GSFC

The Hartley 2 encounter is scheduled for October, 2010, but the EPOCh work has been underway since late January. According to principal investigator Drake Deming, the most recent observations have focused on the red dwarf GJ 436, known to be orbited by a Neptune-class planet whose eccentric orbit may be caused by gravitational effects from a second planet, possibly with a mass comparable to that of Earth, and in an orbital period ranging from twenty to thirty days. It is conceivable that such a planet would fall within this small star’s habitable zone (but see below), making any transit measurements quite helpful, since EPOCh can detect transiting planets as small as half the size of Earth.

Absent a transit of a new planet, though, EPOCh can still study the known planet to collect further data about its orbital perturbations. Transits are useful not only for discovery purposes, but because they can help us peg the length of the planet’s orbital period and its diameter. Moreover, EPOCh will have a serious edge over ground-based observatories, being able to watch each target for weeks at a time and working without an atmosphere that could distort received data. You can find a target list for EPOCh here. Thus far, observations of the giant planet HAT-P-4 seem to have been a particularly successful, with confirmed transits in the voluminous data awaiting further investigation.

I mentioned how tricky some of our acronyms can be, but how about star designations? In a recent newsletter covering the EPOCh work, Deming noted that HAT-P-4 is also known, depending on the database you use, as SAO 64638 and TYC 2569-1599-1. We’re dealing with an 11th magnitude G-class star located in the constellation Boötes. Of the 293 planets thus far found around other stars, 51 are known to be transiting.

Because such transits are detectable with properly configured amateur equipment, do be aware of TransitSearch, which works with observers worldwide to observe candidate stars when transits might occur. Interestingly, GJ 436, the EPOCh target discussed above, is in need of all the observations it can get, recent work suggesting the proposed second planet may not in fact exist. EPOCh should be able to tell us more, but interested amateurs can help by getting involved with TransitSearch.