Does anybody remember an old science fiction movie involving an attempt to snatch meteors from space? We’re talking something made probably in the 1950’s, and all I remember is a group of one-man spaceships sent up — for reasons that escape me — to go after meteors. You can imagine the dynamics of trying to catch a meteor with a scoop on a spacecraft. All subsequent attempts to identify this film have failed, but I was reminded of it by the discovery of a new mineral in a sample of interplanetary dust. Collecting the dust wasn’t quite as terrifying as the meteor-grabbing depicted in the movie, and the motivation for it was surely sounder. 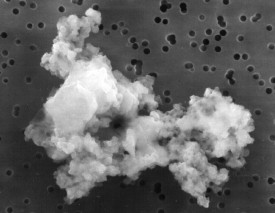 In any case, it’s clear that you don’t have to go into deep space to collect interesting things. It was Scott Messenger (Johnson Space Center) who suggested that interstellar dust particles (IDPs) from a particular comet could be captured in the stratosphere if scientists chose their time carefully. Messenger zeroed in on comet 26P/Grigg-Skjellerup as a source for the IDPs in question, and follow-up dust collections by NASA involved high altitude aircraft flown out of Edwards Air Force Base in 2003.

Image: Although not part of the sample gathered from comet 26P/Grigg-Skjellerup, this is a piece of interplanetary dust caught by a high-flying U2-type aircraft. It likely originates in the early days of our Solar System, being stored and later ejected by a passing comet. The particle is composed of glass, carbon, and a conglomeration of silicate mineral grains. It measures only 10 microns across, a tenth the width of a typical human hair. Credit: NASA.

Not only was the attempt successful, but 26P/Grigg-Skjellerup should turn out to be useful in future work, appearing as it does every five years. Team leader Keiko Nakamura-Messenger notes that grains of the newly identified mineral were a mere 1/10,000th of an inch in size. Fortunately, Johnson Space Center has a new electron microscope, and co-discoverer Lindsay Keller (JSC), like Nakamura-Messenger, was taken somewhat by surprise at what the instrument was able to find:

“Because of their exceedingly tiny size, we had to use state-of-the-art nano-analysis techniques in the microscope to measure the chemical composition and crystal structure of Keiko’s new mineral. This is a highly unusual material that has not been predicted either to be a cometary component or to have formed by condensation in the solar nebula.”

The new mineral is a manganese silicide now named Brownleeite, after Donald Brownlee (University of Washington, Seattle), a founder of interstellar dust particle research, and principal investigator of NASA’s Stardust mission. Turns out the trick isn’t to collect interplanetary dust — remarkably, the Earth collects about 40,000 tons of particles from space every year — but to pin down the sources of the particles. Most are assumed to come from disintegrating comets and asteroid collisions, and all are of interest because they offer information about the building blocks from which the Solar System was formed. The new mineral joins the other 4,324 minerals identified by the International Mineralogical Association, while reinforcing the case for interplanetary dust collection close to home.