The much anticipated Nantes conference on Extrasolar Super-Earths is already paying off big in the form of a triple system of such planets. Found around the star HD 40307, the planets are among the 45 candidate worlds recently identified by European scientists using the HARPS instrument, a spectrograph mounted on the European Southern Observatory’s 3.6-meter telescope at La Silla. The survey focused on F, G and K-class stars, finding 45 potential planets, all of which are below 30 Earth masses and show an orbital period shorter than fifty days.

What’s happening here testifies to the growing sophistication of our tools. While most of the 300+ positively identified exoplanets have been found around Sun-like stars, they have so far tended to be gas giants. Teasing smaller planets out of the data requires long observing runs — HD 40307, for example, has been under active study for five years — and it also requires the greater precision of instruments like HARPS. “With the advent of much more precise instruments such as the HARPS spectrograph on ESO’s 3.6-m telescope at La Silla,” says planet-hunter Stéphane Udry (Geneva Observatory), “we can now discover smaller planets, with masses between 2 and 10 times the Earth’s mass.” 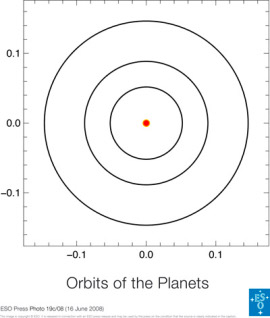 HD 40307 is slightly less massive than the Sun, and located 42 light years away in the southern sky, in the direction of the constellations Doradus and Pictor. The three planets turn out to have masses of 4.2, 6.7 and 9.4 times that of the Earth, and they’re in tight orbits of 4.3, 9.6, and 20.4 days, respectively. Consider how sensitive our exoplanetary studies have become: The smallest of the planets has a mass one hundred thousand times less than that of the star it circles, inducing a ‘wobble’ of only a few meters per second. But to get the big picture, bear in mind that planets in close orbits are at this point easier for our instrumentation to detect than those in wide, long-period orbits. How much are we still unable to detect?

Image: Schematic view from above of the orbits of the three super-Earths around their host star. The scale is in astronomical units (AU), the mean distance between the Earth and the Sun. All planets are thus well within the orbit of Mercury around the Sun (which has an orbital period of 88 days). Credit: European Southern Observatory.

Thus we get into some exciting quotes, this one from Michel Mayor (Geneva Observatory), a familiar name as one of the discoverers of a planet around the star 51 Pegasi in 1995. That event kicked off the exoplanet hunt, one that seems to grow in intensity with each passing day. Looking not only at the super-Earths HARPS has disclosed but at the entire HARPS sample and its 45 candidate planet result, Mayor comments:

“Clearly these planets are only the tip of the iceberg. The analysis of all the stars studied with HARPS shows that about one third of all solar-like stars have either super-Earth or Neptune-like planets with orbital periods shorter than 50 days.”

Good news indeed, especially when you follow it up with this from colleague Udry, who factors in the limitations of our instruments and currently available data:

“It is most probable that there are many other planets present: not only super-Earth and Neptune-like planets with longer periods, but also Earth-like planets that we cannot detect yet. Add to it the Jupiter-like planets already known, and you may well arrive at the conclusion that planets are ubiquitous.”

The same team also discussed two other planetary systems at the Nantes conference. One involves a 7.5 Earth-mass world around HD 181433 in a 9.5 day orbit, accompanied by a Jupiter-like planet in a three-year orbit. The other is a 22 Earth-mass planet in a system that also includes a Saturn-class world, also with a three-year period. The conference runs until the 18th and will doubtless occupy us in coming days with a series of further results. The above work from the Geneva team has been submitted in the form of two papers to Astronomy & Astrophysics. Full references here when they become available.

Next post: New Precursors of Life Identified in Meteorite