The Ultimate Project to the Stars

Tau Zero journalist Larry Klaes takes on an old subject with a new twist: The multi-generational starship. It’s a familiar trope in science fiction (think Brian Aldiss’ Non-Stop or Heinlein’s ‘Universe’), but one given modern impetus in the hands of a small team of visionaries dedicated to making it happen. These guys think big, not just in terms of ship size but trip duration (ten thousand years!), and envision at least 500 years as the time needed to get their project ready to launch. Always a promoter of long-term thinking, Centauri Dreams follows the improbable tale with considerable interest.

Despite how they appear to us in the night sky and the relative ease and speed with which spaceships in most science fiction stories fly to them, the twinkling stars in the heavens are, in reality, immensely far away. The few robotic probes that have left our Solar System faster than any other vehicles yet built would not — if aimed in their direction — reach the the nearest stars for 77,000 years. Spaceships that could attain speeds approaching that of light (186,000 miles per second), while theoretically possible, have many technological and physics hurdles to overcome and are a long way from being built.

Due to this reality, scientists began contemplating in the last century how humans could reach other star systems alive aboard vessels that could become practical in the not too distant future.

Birth and Death Among the Stars

One idea that was quickly taken up by science fiction authors is the multigenerational starship. A large selection of people would be placed aboard a giant spacecraft with the necessary tools and resources to survive the many centuries it would take a relatively slow-moving vessel to reach another star system. The crew members who eventually arrive at the target sun and its circling worlds would be the distant descendants of the original explorers, ready to disembark from their ship and settle in these new lands. 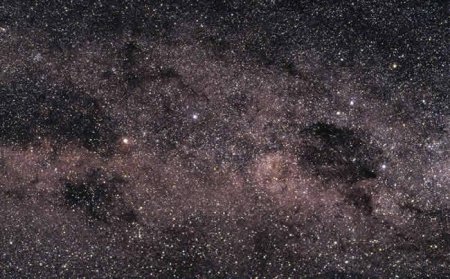 Image: It’s a big sky. Can we do better than the 77,000 years it would take a Voyager-class spacecraft to reach the Centauri stars? In the image, Alpha Centauri is visible just left of center, a triple system whose light here appears as a single bright dot. Credit: Claus Madsen/ESO.

One group of individuals has been inspired enough by the multigenerational starship concept to begin the first serious efforts to make the idea not just a reality but to turn it into a purposeful focus for all of humanity – to expand into the Milky Way galaxy and save our species from any threats of extinction.

Grandly called The Ultimate Project, the plan calls for building a cylindrical starship over one mile long and one mile wide weighing 100 million tons that would carry one million people across interstellar space for 10,000 years or more to colonize an inhabitable Earthlike planet that astronomers hope to find within the next few decades.

The original designer of The Ultimate Project is Dr. Steven Kilston of Ball Aerospace & Technologies Corporation in Boulder, CO. When Kilston became manager of Ball’s Terrestrial Planet Finder (TPF) program ten years ago, he began to wonder how humanity would respond to the discovery of a planet much like our world circling another star.

“My answer was that we should go there, and I began discussing with many aerospace industry colleagues the practical considerations that could enable that,” replies Kilston. In January of 1999, he presented his first poster on The Ultimate Project to the American Astronomical Society (AAS). Kilston has since presented his idea at JPL, MIT, and many other institutions. 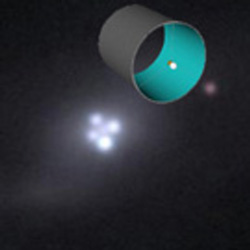 Kilston envisions a project and ship that would take over 500 years and cost $50 trillion to complete before it even leaves the Solar System. Spinning at one revolution each minute to create a sense of gravity similar to Earth’s surface for the comfort of its one million residents, the ship would use nuclear fusion engines to eventually move at 373 miles per second through the Milky Way galaxy. In addition to the relatively slow speed being an attainable velocity target, a slower travel rate means there will be less chance of a dangerous impact with space debris. A layer of water in the ship’s outermost deck would provide protection for the crew from cosmic radiation.

With the rapid advancements in technology and our understanding of the Universe happening every day, some might wonder why humanity should invest in a project that will take centuries to build and thousands of years to transport people to another star system when a better means of reaching the stars might come along in the near future.

“If people thought like that about computers, they would never buy one,” says Kilston, who also cites Europe’s medieval cathedrals and the Great Wall of China as examples of some successful multigenerational projects. “Also, having experts, machines, and materials on board, together with maintaining communications with Earth throughout the voyage, would mean that any improved technology could be incorporated quickly in situ, possibly keeping this ship ahead of later ones.”

Another concern regarding multigenerational starships is the possibility of the crew’s society degenerating into barbarism and forgetting its original purpose after centuries of isolation from Earth. Most of the science fiction stories that take place aboard such vessels assume this situation.

Sven U. Grenander, a senior engineer at JPL, a “self-assigned Rogue Technologist”, and manager of the formation and start-up of The Ultimate Project, thinks it is a certainly that factionalism and barbarism will flourish aboard the starship without a written constitution that can survive the long trip.

“The constitution has to serve as a fractal seed that can grow in a predictably orderly fashion and not be overtaken by chaos or lawlessness,” says Grenander. “The constitution is the most important element of the project as it is the only thing that will keep the human crew from spiraling off into any number of project-defeating directions.”

As for how the average citizen can become involved, Nancy J. Grenander, who manages the project’s operations and business structure, says she “would like to see The Ultimate Project stimulate young minds so that they can think about the possibilities of doing something that some may think impossible. I want to see them let their imaginations go forward even though they might not see the completed project.”