Solar sail development has surely been a frustrating thing for Sandy Montgomery, who knows that what stands in the way of pushing this technology into space isn’t the need for scientific breakthroughs but adequate funding. Montgomery’s team at Marshall Space Flight Center has been examining the potential of solar sails for a long time, and is well aware that leaving the propellant behind is a way to get more payload to your destination with considerably less overhead all around. 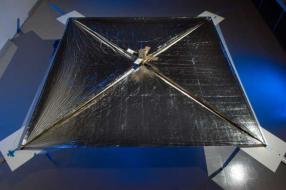 And solar sails, which can ride the momentum imparted by photons from the Sun, are the ideal way to study ‘propellantless’ propulsion with near-term technologies. What a pleasure to see the launch window approaching for a solar sail deployment experiment in space, led by Montgomery’s team and counterparts at NASA Ames. NanoSail-D is to be launched aboard a Space Exploration Technologies (SpaceX) Falcon rocket some time at the end of July or the beginning of August. Montgomery calls it the “…first fully deployed solar sail in space, and the first spacecraft to use solar pressure as a primary means of attitude control or orbital maneuvering.”

It’s also an opportunistic way to reach low-Earth orbit, since NASA Ames was already committed to participation in the Falcon 1 launch, and the Poly Picosatellite Orbital Deployer (P-POD) developed at California Polytechnic State University is ready to deploy the sail. ‘Nano’ may be an overstatement, but it does capture the small size of this mission’s payload, which weighs in at a scant nine pounds and measures only slightly larger than a loaf of bread in length.

Compared to some of the huge designs contemplated for future missions, the sail itself is relatively small. Weighing less than ten pounds (Montgomery notes that the team carries it around in a special suitcase), the sail will deploy to about 100 square feet of surface. This video offers a helpful explanation of the deployment of the sail’s panels.

A realistic technology for future missions? Believe it. Although the push from the Sun is tiny, the effects are cumulative and quickly begin to mount. Says Montgomery:

“It’s not so much about how far a sail will go compared to a rocket; the key is how fast. The Voyagers have escaped the solar system, and they were sent by rockets, but it’s taken more than three decades to do it. A sail launched today would probably catch up with them in a single decade. Sails are slower to get started though. So, for example, between the Earth and the moon, rockets might be preferred for missions with a short timeline. It’s a trip of days for rockets, but months for a solar sail. The rule of thumb, therefore, would be to use rockets for short hops and solar sails for the long hauls.”

Think, too, about how the idea of solar sails is changing. The vast sails described by Cordwainer Smith (“The Lady Who Sailed the Soul”) or Arthur C. Clarke (“The Wind from the Sun”) were envisioned without a functioning nanotechnology to support them. Montgomery notes that today’s microelectronics make it possible to shrink the size of the sail and still perform serious missions. In a few decades, nanotech may have reached the point where smaller sails are sufficient to get assembler-laden research stations to their destinations. As we deploy NanoSail-D, let’s keep an eye on developing sail technologies, including beamed microwave propulsion, as we look to future prospects for even longer missions via laser or particle beam methods.

Next post: A Poetic View of the System’s Edge