A Scarcity of Gas Giants?

We’d all like to think our Solar System is a run-of-the-mill place, filled with the kind of planets, including our own, likely to be found around other stars. But maybe it’s not so ordinary after all. For recent work suggests that stars like the Sun aren’t all that likely to form planets the size of Jupiter or larger. So while small, rocky worlds may or may not be common — we’re still finding the answer to that one — the combination of rocky worlds and gas giants we take for granted may actually be distinctive.

Once again I’m reminded how many conjectures go into our projections of habitable worlds. Here’s one possibility: Without a large gas giant in the outer solar system to act as a gravitational shield for the inner system, planets in the habitable zone of a star might be so pelted by space debris that life would be unlikely to form on them. So it’s conceivable that any findings about the scarcity of gas giants are a blow to our astrobiological hopes around other stars. At least, around stars like our own.

The work in question looks at the Orion Nebula, that fertile breeding ground for new stars. Only a million years old, an infant in cosmic terms, this is quite a dense place, from which the view must be striking: Pack a thousand stars into a cube several light years to the side and you’ve got the idea. The Sun’s origin some four billion years ago is commonly thought to have occurred in a dense, open cluster like Orion. These clusters come apart with age, their stars gradually separating until no trace of the original cluster remains.

Using the Combined Array for Research in Millimeter Astronomy (CARMA), researchers from the University of California at Berkeley, Caltech, and the Harvard-Smithsonian Center for Astrophysics have found that only eight percent of the stars in Orion’s central region have the surrounding dust needed for a gas giant. That would be a disk with a mass greater than one-hundredth the mass of the Sun. Indeed, the average mass of a protoplanetary disk in this region was only one-thousandth of a solar mass. 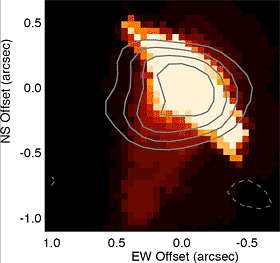 Only one in ten of the stars showed radiation characteristic of any dust disk whatsoever. The paper on this work explains the ramifications: “Evidently, giant planet formation is either advanced (having thus depleted the small dust grains in the disk) or impossible around most stars in the ONC [Orion Nebula Cluster].”

Image: While a Hubble Space Telescope image of visible light emitted by a protoplanetary disk in the Orion Nebula called proplyd 170-337 shows hot, ionized gas (red) surrounding and streaming off of a disk (yellow), 1.3 mm radio observations by CARMA and SMA reveal the dust disk hiding within the hot gas (contours). This protoplanetary disk has a mass more than one hundredth that of the sun, the minimum needed to form a Jupiter-sized planet. Credit: Bally et al 2000/Hubble Space Telescope & Eisner et al 2008/CARMA, SMA.

The findings may well relate to how tightly packed the Orion stars are. John M. Carpenter (Caltech), relating the work to previous studies of the Taurus cluster (where twenty percent of the stars showed enough dust to form planets), had this to say about Orion:

“Somehow, the Orion cluster environment is not conducive to forming high mass disks or having them survive long, presumably due to the ionization field from the hot, massive OB stars , which you might expect would photoevaporate dust and lead to small disk masses.”

This (from the paper) is also interesting, while highlighting the obvious need for further work:

… our observations show no clear correlation between stellar mass and disk mass, but suggest that massive disks may be more likely to be found around lower mass stars. The percentage of detected disks is lower for stars more massive than 1 M⊙ , and the most massive disks detected are associated with the relatively low stellar mass stars in the sample. However, larger numbers of stellar and disk mass measurements in the ONC are needed to build up better statistics and further constrain the relationship between stellar and disk properties.

Let’s relate all this this to broader exoplanet findings. Six percent of the stars thus far surveyed have planets the size of Jupiter or larger. This does not mean that smaller disks of the sort that could give rise to rocky planets are not out there, and perhaps in abundance. Improved instrumentation, like the unfinished Atacama Large Millimeter Array (ALMA) now being built in Chile, may tell us how numerous they are. But it does imply that what we assume to be a common way of producing stars like the Sun is less likely to deal up Jupiter-class worlds, with ramifications not yet fully understood. (See the comments re a slight change to the text above).

An abridged version of the paper is available online. It’s Eisner et al., “Proplyds and Massive Disks in the Orion Nebula Cluster Imaged with CARMA and SMA,” accepted for publication this August in the Astrophysical Journal.