The latest Carnival of Space is now available at the Space Disco site, where Dave Mosher has put together a helpful slideshow of entries handsomely illustrated and linked to the originals. With seven new blogs coming online at Discovery Space, we’ll doubtless be seeing contributions from many of these fine writers, people such as Ray Villard, Chris Lintott and Mosher himself. I’m particularly looking forward to Jennifer Ouellette’s Twisted Physics blog, which this week offers a backgrounder on tachyons. 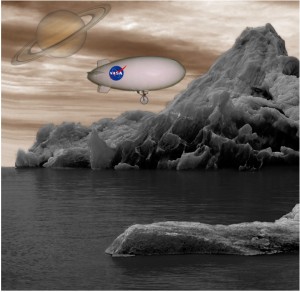 In terms of our usual beat, deep space from the outer planets into interstellar space, I’ll send you to David S.F. Portree’s Altair VI site, where the author has gone to considerable trouble to present the results of a study by Science Applications, Inc. (SAI) on the possibilities of futuristic missions to Titan. This material was originally presented in 1983 at a NASA workshop and offers a view of what should still be a viable game plan: To seed the clouds of Titan with floating laboratories to study the chemical evolution occurring in its atmosphere, with an eye toward examining life’s building blocks.

The SAI concept involved an orbiter that would provide the necessary radio relay between systems in the atmosphere and on the surface of Titan and scientists on Earth. It’s fascinating to contrast what we did with the Huygens probe with what SAI came up with 25 years ago, including a ‘penetrator’ probe that would collect surface data for return to the orbiter. And how about these exotic systems:

SAI’s most novel and picturesque Titan exploration systems were its large and small buoyant stations. Delivered into Titan’s atmosphere by the flyby bus, these probes would be based on the Galileo Jupiter atmosphere probe design. The small stations, packed into aeroshells the same size as the Galileo probe (1.25 meters), would be balloons. The large station, packed into an aeroshell twice as large, would be either a large balloon or a powered blimp. Small buoyant stations would operate between 100 and 10 kilometers above Titan, while large buoyant stations would operate between 10 kilometers of altitude and Titan’s surface.

Getting such missions to Saturn using Space Shuttle boosts to Earth orbit imposed severe limitations upon the planners, but assuming a future capability of on-orbit assembly and refueling allowed the full spectrum of concepts to be explored, including a complex mission design with 28 experiments and no need for planetary gravity assists. It’s fascinating to read through these ideas, and frustrating to realize how much the cost estimates have changed in the years since. But we can certainly envision blimps like these being put to use in a variety of exploratory settings — Venus also comes to mind, as do all the outer planets — as we refine robotic systems for environments beyond the reach of manned missions.

Next post: A Discouraging Outlook for Centauri A Planets