Astrometry, using the position and motion of celestial objects to further astronomical research, is ever more useful in the study of extrasolar planets. If you can measure how much a given star is displaced by the presence of a planet, you have a valuable adjunct to existing radial velocity and transit methods. Now a new study has examined astrometry’s uses with binary stars, using the Hale telescope on Mt. Palomar and the Keck II instruments on Mauna Kea. And with certain restrictions, adaptive optics may allow us to detect binary star planets.

The targets were seventeen binary or multiple star systems, most of them M-dwarf binaries closer than 20 parsecs from the Sun. Observations were conducted in the near infrared, with relative separations and position angles carefully measured. Study authors Krzysztof Helminiak and Maciej Konacki (Nicolaus Copernicus Astronomical Center, Poland) note the advantage of close systems:

The closure of companions allows one to observe visual binaries in a smaller ﬁeld, where atmospheric distortions are weakly affecting the measurements, [the] star’s image is better sampled, and the measurements errors in pixels transfer to smaller errors in arcseconds. But, instead of parallax and proper motion, one have to take into account the orbital motion. Note also that in case of a positive detection of a 3-rd body, relative astrometry does not give the information around which particular star of the system the body is orbiting. 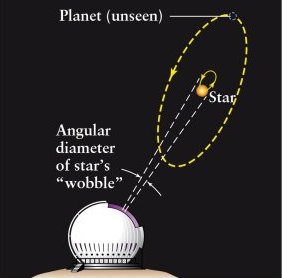 The funding-challenged Space Interferometry Mission, unlikely to launch before 2016, will use astrometric techniques in the hunt for terrestrial worlds around nearby stars, a search that will demand an accuracy of one millionth of an arcsecond. A characteristic ‘wobble’ in relation to nearby reference stars may indicate that the target star has a companion; indeed, the mission has the potential of detecting planets smaller than Earth around the closest stars. While we’re waiting for missions like SIM, though, the current paper shows that careful CCD imaging with adaptive optics on Earth can be a successful strategy.

Image: Astrometry focuses on measuring how the position of a star in the sky varies as the star wobbles. If the extrasolar system is seen face-on, this variation will take the form of a circular motion. If the system is seen edge-on, the variation will appear as a back-and-forth motion on the sky. Credit: Rich Townsend/University College London.

Don’t expect the detection of terrestrial worlds from this method — the authors are talking about “…much better precision than 1 milliarcsecond,” or a thousandth of an arcsecond. SIM beats that by far, but what the authors outline may be sufficient for detecting larger worlds around small stars and, of course, it’s doable today. The paper is Helminiak and Konacki, “Precise Astrometry of Visual Binaries with Adaptive Optics. A Way for Finding Exoplanets?” slated to appear in the proceedings of the Les Houches Winter School Physics and Astrophysics of Planetary Systems, (EDP Sciences: EAS Publications Series), and available online.