Remember those oceans of methane we thought might exist on Titan? They were an exciting thought (I recall hypothetical images of the Huygens probe bobbing in such an ocean at the end of its journey, before we knew what it would actually land on). It’s exciting to confirm that liquid does exist on Titan’s surface in the form of liquid hydrocarbons, with a positive identification of ethane. At least one of the large lakes the Cassini orbiter has found there contains the substance, but we also know that numerous other lake-like areas exist beneath the smog. 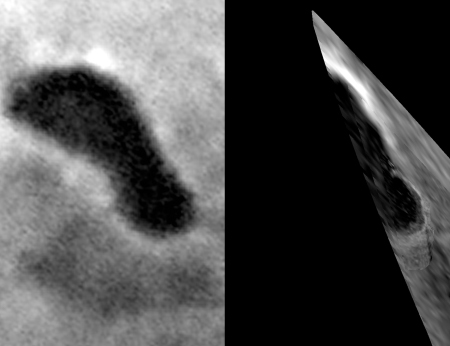 Image: The Imaging Science System aboard NASA’s Cassini orbiter took the image, left, of Ontario Lacus in June 2005. (Image credit: NASA/JPL/Space Science Institute.) Cassini’s Visual and Infrared Mapping Spectrometer took the image, right, of Ontario Lacus in December 2007. This view, taken at 5-micron wavelengths from 1,100 kilometers (680 miles) away, shows the part of the lake that is visible on Titan’s sunlit side. What appears to be a beach is seen at the lower right of the image, below the bright lake shoreline. (Credit: NASA/JPL/University of Arizona).

The news should come as no major surprise, just as discovering water ice on Mars is momentous but at the same time long anticipated. But in both cases making the detection has been tricky, on Titan because atmospheric hydrocarbons make observing a challenge. Cassini managed the feat with its visual and infrared mapping spectrometer (VIMS) nonetheless, and we now know that Ontario Lacus, a bit larger than Lake Ontario on Earth and imaged in late 2007 on Titan’s south polar region, is awash. More in this JPL news release.

“Detection of liquid ethane confirms a long-held idea that lakes and seas filled with methane and ethane exist on Titan,” said Larry Soderblom, a Cassini interdisciplinary scientist with the U.S. Geological Survey in Flagstaff, Ariz. “The fact we could detect the ethane spectral signatures of the lake even when it was so dimly illuminated, and at a slanted viewing path through Titan’s atmosphere, raises expectations for exciting future lake discoveries by our instrument.”

And note this, from VIMS principal investigator Robert H. Brown (University of Arizona):

“It was hard for us to accept the fact that the feature was so black when we first saw it. More than 99.9 percent of the light that reaches the lake never gets out again. For it to be that dark, the surface has to be extremely quiescent, mirror smooth. No naturally produced solid could be that smooth.”

Thus we learn more about a hydrological cycle based on methane, with ethane and other hydrocarbons created by the breakdown of atmospheric methane by sunlight. Other evidence of the cycle seems glaringly obvious, in the form of channels evidently carved by fluids, along with evidence of rain and evaporation. Indeed, Ontario Lacus, ringed by a gradually more exposed beach, seems to be evaporating as we watch. Seasonal change in this dynamic environment should be fascinating to monitor as, in a few years, Titan’s north pole emerges into sunlight.