As someone who has always been interested in how we name things, the choices on Enceladus have been particularly pleasing. On the remote Saturnian moon, place names are chosen from the The Arabian Nights, which is how we wind up with Damascus Sulcus, as seen in the photo below. A sulcus is a large fracture, a ‘tiger stripe,’ as they’re called on Enceladus. The four most prominent are named Alexandria, Cairo, Baghdad and Damascus, adding yet a further tinge of exotica to a tiny world that has already shown itself to be highly unusual.

Cassini’s August 11 flyby is, as the photo shows, paying off big. The intent was to focus in on sources for the jets that spew water vapor, ice and trace organics into space — the yellow circles in the image show two particular sources of jets. What we’re after, of course, is a closer look at geological activity in the sulci, in hopes of determining whether liquid water exists beneath the surface. The new details show that the fractures are some 300 meters deep with V-shaped inner walls, surrounded by terrain littered with blocks of ice tens of meters in size. 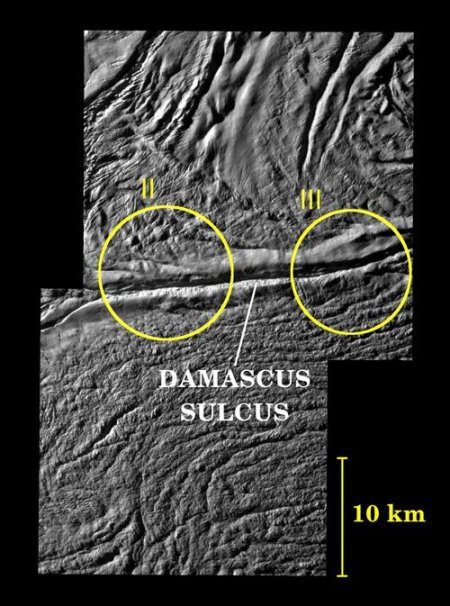 Image: Damascus Sulcus on Enceladus. One process that may be at work here is the sealing off of active vents by condensing water vapor, which then forces new jets to emerge elsewhere in the same fracture. Credit: NASA/JPL/Space Science Institute.

The method for getting the high-resolution images from this flyby was itself fascinating. Cassini was moving past Enceladus at 64,000 kilometers per hour, so it was necessary to compensate for the effects of that motion. Imaging team member Paul Helfenstein compared this to “…trying to capture a sharp, unsmeared picture of a distant roadside billboard with a telephoto lens out the window of a speeding car.” He goes on:

Previous post: A New Look at Near Earth Asteroids