An Icy Wanderer from the Oort Cloud

A symposium called Sloan Digital Sky Survey:Asteroids to Cosmology, held in Chicago this past weekend, is producing interesting news, not the least of which is the discovery of a ‘minor planet’ that is currently inside the orbit of Neptune. 2006 SQ372 is only in the neighborhood briefly, already setting out on a journey that will take it 150 billion miles from the Sun. Its orbit is an ellipse four times longer than it is wide, not dissimilar from the dwarf world called Sedna, which was discovered in 2003. But SQ372 strays even further out and takes twice as long to complete its orbit. You’ll need to click to enlarge the image below to see the details. 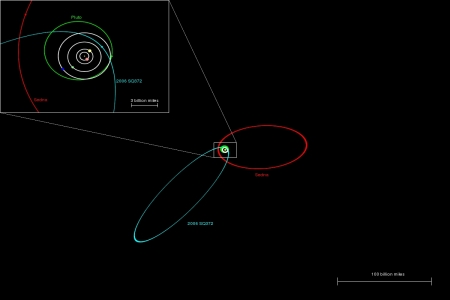 Image (click to enlarge): The orbit of the newly discovered solar system object SQ372 (blue), in comparison to the orbits of Neptune, Pluto, and Sedna (white, green, red). The location of the Sun is marked by the yellow dot at the center. The inset panel shows an expanded view, including the orbits of Uranus, Saturn, and Jupiter inside the orbit of Neptune. Even on this expanded scale, the size of Earth’s orbit would be barely distinguishable from the central dot. Credit: N. Kaib.

Is the new object actually an unusual comet? Andrew Becker (University of Washington), leader of the discovery team, calls it such, and adds that 2006 SQ372 simply never gets close enough to the Sun to develop a bright tail. Thirty to sixty miles across, the chunk of rock and ice was discovered and its existence confirmed through data originally taken to study supernovae, and the team behind the discovery has since been running computer simulations to make sense out of the object’s orbit. Says graduate student Nathan Kaib (also at UW):

“It could have formed, like Pluto, in the belt of icy debris beyond Neptune, then been kicked to large distance by a gravitational encounter with Neptune or Uranus. However, we think it is more probable that SQ372 comes from the inner edge of the Oort Cloud.”

The latter is an intriguing prospect. SQ372 is ten times closer to the Sun than the main body of the Oort Cloud, in which most objects are thought to orbit at distances of several trillion miles. The discovery of Sedna may have pointed to an ‘inner’ Oort region, and SQ372 could fit into that same picture. What’s likely to happen as we tune up next-generation surveys is that we’ll discover more and more objects of this class, giving us a better read on the population and distribution of this reservoir of icy materials.

Oort Cloud objects may in some cases be interstellar wanderers. We can imagine a process in the period of planetary formation four and a half billion years ago in which rocky materials were ejected from the inner system by the gravitational effects of the giant planets. A passing star could eventually dislodge some of these objects, causing them to move back into the inner system, where they would be visible as comets. Others might be ejected into interstellar regions, perhaps eventually falling into the gravitational grip of another star, cometary starships exchanging materials between distant solar systems.

It’s a pleasing thought, but we have much to learn before we can consider it definitive. As to 2006 SQ372 itself, its orbit ensures that a long time will pass before we have a closer look, 22,000 years in fact, and by then let’s hope we will have found ways to move among Oort Cloud objects at will, sampling, learning and exploiting their resources as we support a civilization with interstellar reach.