With our eyes on a proposed interstellar future, we don’t want to neglect the real challenges of preserving the steps taken along the way. I’m thinking about this because of a post on an astronomy list (thanks to Larry Klaes for the pointer) by Richard Sanderson, who is curator of physical science at the Springfield Science Museum (MA). Sanderson is worried about the media upon which we store our information, and for good reason. Here’s the issue in a nutshell:

The difficulties that future historians may encounter are related to the ephemeral nature of digital information and the media used to store it. I can visit an old monastery in Europe, find a giant leather-bound astronomy book from the 17th century, blow off the dust, open it, and read the pages (provided I can read Latin). The only tools required are my eyes and hands. But imagine someone living in the 23rd or 24th century who finds an old box of computer diskettes or CDs. Even if the diskettes haven’t been corrupted and the CDs haven’t delaminated, will that person be able to access the information?

The question surfaces enough in the computer press to give at least some reassurance that it’s under active study, and of course we have projects like the Internet Archive at work, attempting to preserve such ephemera as short-lived Web sites, particularly those associated with concrete events that have their brief moment in the Sun and then disappear. Sanderson quotes Curator, a magazine for museum professionals, to the effect that while high-quality photographic film can last 500 years, unmanaged digital media have a life expectancy of only five. We have examples of books in our museums that have lasted for centuries, but in the digital age we’re constantly forced to transfer our data from one medium to another. 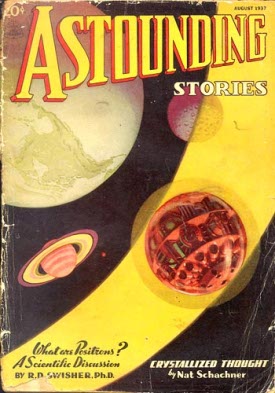 I can see signs of the problem in my own life. I’m using old pulp magazines, some of them collected forty years ago, some recently bought, to work on a book project. An Astounding Story: Science & Fiction in the Golden Age looks at the changing views of science presented by these magazines in the first third of the 20th Century. Anyone who has collected pulps knows that severe limitations are in play here. Not only did World War II paper drives lead to the destruction of vast stores of the magazines, but the paper they were printed on was high in acid, making their deterioration a process that is all but impossible to reverse.

Image: The August, 1937 issue of Astounding Stories. Finding old issues of popular magazines is complicated by the fact that most people in their time saw no need to preserve them.

So I use the lovely old volumes with caution, otherwise keeping them stored in transparent envelopes made for the purpose. It’s remarkable to me how few of these magazines, which reflect their time and place so well, have been digitized against the day when they’re all but unusable. Simple OCR isn’t adequate, because we need the context as well as the content. We need to see the surrounding material, the ads, the illustrations, the environment of the text that informs how people in that era experienced the embedded stories and occasional science article.

Shifting media a bit, I’m also an inveterate collector of old movies. I have some 1400 films going back to the silent era and ending in the mid-1950s (1956, the year Bogart died, is usually my terminus). All of these have been taped from movie channels and now reside on VCR tapes, yet another example of a technology whose day is passing. I could re-master these onto DVD but the task is enormous. In any case, a DVD recorder would allow me to reassemble many of them at far higher quality as presented on my new HDTV. How to proceed, and when to switch?

Sanderson calls this the ‘stewardship’ problem:

Unlike books and paper archives, which only require a decent environment and some security, digital media require continual stewardship, which translates into a significant investment of time and money. As time goes on, data must be transferred over and over onto newer media so that both the information and the context (software) are preserved and made accessible using future digital equipment. The stewardship problem is exacerbated by the sheer volume of digital data being generated. 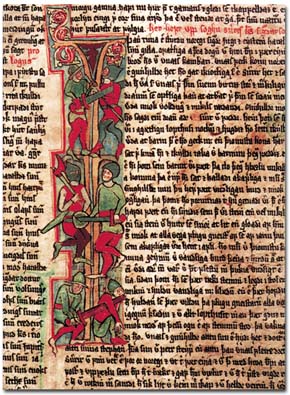 So are we entering a ‘dark age’ of science that passes along to the future a record containing large holes where digital data were mismanaged? Let’s hope not, but we have to be aware of the danger. Years ago in Reykjavik, as a UNC graduate student trying to master Old Icelandic, I examined a manuscript called the Flateyjarbók at the Háskóli Íslands (University of Iceland). The manuscript, 225 vellum leaves containing sagas of the Norse kings, historical annals and poetry, has survived since the late 14th Century and remains an exquisite testament to a people and their times. Knowing its fragility and its age, not to mention the uniqueness of its contents, we have no doubt that it needs to be preserved.

Image: A page from the Norse saga of King Sverre Sigurðsson in the Flateyjarbók, a manuscript that has endured for centuries, challenging us to find better ways to preserve data that may otherwise be lost. Credit: Árni Magnússon Institut, Reykjavik.

The trick is in understanding things that are closer to our own time. Materials that seem pedestrian to us can quickly disappear. In an era where so many journals are expanding their online presence, where peer review is being taken into new and productive realms on the Internet and the very idea of the book is being challenged by digital devices, we need to remember that science builds upon the efforts of those who have come before. As we take the first tentative steps toward an interstellar culture, we are in a transitional period in data stewardship that is fraught with peril. Let’s be careful about preserving that future history.