Cosmic Dust from the Main Belt

With the Steins encounter looming, let’s keep the focus on the asteroid belt, in this case by examining a connection between that distant region and our own planet. Cosmic dust particles — tiny bits of pulverized rock up to a tenth of a millimeter in size — move continuously through the Solar System, a kind of micro-thin fog of micrometeorites that contributes hundreds of billions of particles to Earth’s atmosphere. New research into the makeup of some 600 of these particles now reveals their chemical and mineral content, allowing an overview that points to their origin. The suspected source: A group of asteroids between Mars and Jupiter. 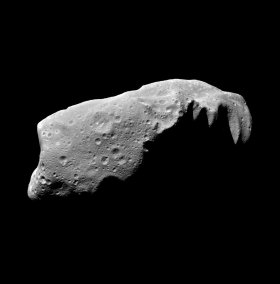 You can see one of the Koronis asteroids in the image at left, which shows 243 Ida as photographed by the Galileo probe. What we now believe about the Koronis asteroids is that they were formed some two billion years ago by the breakup of a much larger asteroid. Within the Koronis family are the ninety or so Karin asteroids, which seem to be in a constant process of smashing into each other to create cosmic dust. Themselves the result of a far more recent collision (pegged at 5.7 million years), the Karin asteroids are useful because they are readily susceptible to spectroscopic analysis.

Image: This view of the Koronis asteroid 243 Ida is a mosaic of five image frames acquired by the Galileo spacecraft’s solid-state imaging system at ranges of 3,057 to 3,821 kilometers (1,900 to 2,375 miles) on August 28, 1993, about 3-1/2 minutes before the spacecraft made its closest approach to the asteroid. Galileo flew about 2,400 kilometers from Ida at a relative velocity of 12.4 km/sec. Credit: NASA/JPL.

“I’ve been studying these particles for quite a while and had all the pieces of the puzzle, but had been trying to figure out the particles one by one. It was only when I took a step back and looked at the minerals and properties of hundreds of particles that it was obvious where they came from. It was like turning over the envelope and finding the return address on the back.”

Genge’s micrometeorites contain information about the formation of asteroids and comets some four and a half billion years ago. As with Martian meteorites, the chance to study material from another celestial object without the expense of mounting an expensive mission is itself noteworthy. We’re synchronizing laboratory mineralogy with infrared observations of the Karin asteroids, work with implications for the origin of the Karin group in what seems to have been a rubble-pile asteroid.