The vast laser-driven sails envisioned by Robert Forward have always fired my imagination. Hundreds of kilometers in diameter, they would rely upon a gigantic Fresnel lens in the outer Solar System to keep the critical laser beam tightly collimated over interstellar distances. Forward conceived of mission designs to stars as far away as Epsilon Eridani, journeys that could be achieved within a human lifetime. He even provided return capability through the use of a multi-part sail. You can read a fictional treatment of this in his novel Rocheworld.

But how do we get from here to there? As of today, we’re close enough to having an operational space sail that if we can talk SpaceX into lofting the NanoSail-D duplicate, we could be shaking out our first space sail within months. Assuming we do go operational before too many months (or years!) pass, the question then becomes, what kind of missions are possible between the laser-beamed lightsail of science fictional imagining and the practical workhorse sail that may well open up a space-based infrastructure for our use. 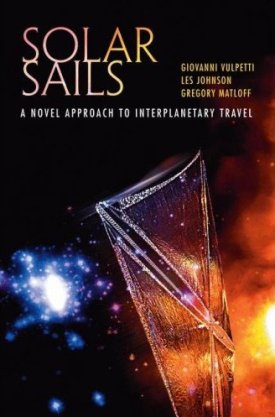 Such questions point to the pleasures of reading a new book on solar sails by three leading experts. Gregory Matloff has been examining the concept for the past thirty years, with seminal papers in the 1980s and continuing work on near-term concepts. His regular consulting at Marshall Space Flight Center keeps him in touch with co-author Les Johnson, NASA’s deputy manager of the Advanced Concepts office at Huntsville. The third author is Italian scientist Giovanni Vulpetti, who has spent most of his professional life on questions of interstellar propulsion ranging from antimatter annihilation to sail design, including the Aurora Project, a sail mission to the heliopause that grew out of earlier work at Italian aerospace firm Alenia Spazio and other European venues.

You would be hard pressed, in other words, to find a more knowledgable team to write a book titled Solar Sails: A Novel Approach to Interplanetary Travel (Copernicus, 2008), and it’s a pleasure to add that despite the sub-title, questions of interstellar significance receive solid treatment. Getting from here (a technology ready to fly for testing) to there (a genuine interstellar craft deploying sail technology) is a long haul, but near-term concepts for a Solar Polar Imager, putting a payload into a highly inclined orbit around the Sun to study its polar regions, are feasible. And so are missions like Heliostorm, which could use a sail to maintain a position between Earth and the Sun (at roughly 0.70 AU, but with a period of one year) to provide advance warning of solar storms.

We can add longer-term prospects that still fall well within our engineering capabilities, missions for comet rendezvous, Mars sample return and, via a Sundiver maneuver, a probe to the heliopause some 200 AU out. The latter, the authors note, could continue for a few decades more to study the environment at the Sun’s gravitational lens some 550 AU from Sol, providing a useful check on Einsteinian general relativity.

All of these concepts and more are discussed here, but it’s the longer-term missions (still using solar photons, not beamed lasers) that truly up the ante. I remember talking to Matloff about them during a Huntsville visit some years back, but the book lays them out sequentially, showing us the limits of the technology in terms of true interstellar missions, and pointing us toward the laser and other beaming options that may be necessary if we are to improve travel times significantly.

For in addition to the outer system work we’d like to perform, examining NEO deflection or developing mining strategies for interesting objects, we’d like to get all the way out to the Oort Cloud, where as many as a trillon comets may lurk. A specialized task indeed, as the authors note:

This is a task for the Oort cloud explorer, perhaps the ultimate sailcraft before a true starship. Imagine a sail 100 nanometers thick, perhaps a kilometer in radius, which is constructed of material capable of withstanding a perihelion pass of about 0.05 AU (about ten solar radii). Such a craft could perform a Sun dive and project its payload toward the stars at velocities in excess of 500 kilometers per second.

All of which gets us to a few thousand AU before the vehicle’s operational life ends, but we’re still — at 500 km/sec — talking about 2000 years to travel the 40 trillion kilometers to the Centauri stars. Can we do better? Matloff worked with Michael Mautner and Eugene Mallove in a series of papers in the Journal of the British Interplanetary Society back in the 1980s to examine such questions. An optimized interstellar sail would use a nanometers-thin monolayer of beryllium, aluminum or niobium, all highly reflective and temperature tolerant. It could be mounted partially unfurled behind an asteroid that would serve as a sunshade, then put into a parabolic solar orbit with a close pass by the Sun measured in the millions of kilometers.

The sail, of course, would be unfurled at the right moment to maximize acceleration. The results:

Analysis revealed that acceleration times measured in hours or days were possible. By the time the ship reaches the orbit of Jupiter, the sail could be furled, since acceleration has fallen to a negligible value. The sail could be used as cosmic ray shielding and later unfurled for deceleration. Flight times to Alpha Centauri, even for massive payloads that could carry human crews, could approximate a millennium. Of course the hyperthin sail sheets required to ‘tow’ such large, multimillion-kilogram payloads would be enormous — in the vicinity of 100 kilometers.

A thousand years to Centauri — this is the figure I recall from my Huntsville discussion with Matloff, and it stuck with me as a kind of insurance policy. If we were to learn, for example, that we had for reasons of survival to exit our Solar System, the prospect of getting at least a fraction of humanity to another, although demanding a lengthy, multi-generational voyage, would not be beyond the reach of a technology we could conceive of developing within this century, using the laws of physics as currently understood. All of which confirms what Robert Forward used to say, “Travel to the stars is difficult but not impossible,” a real reversal of many pre-Forward opinions.

There is more to be said about laser-beaming and other sail concepts (not to mention sail design, construction, deployment and trajectories), but we’ll look at the book’s treatment of these in a later post. Consider this simply a heads-up to alert you to a title that needs to be on your shelf if you’re seriously interested in the next step as we move beyond rocketry. And move beyond it we must, to explore the advantages of leaving the propellant behind to maximize payload for missions that may one day take us deep into the Solar System and beyond.