Evidence for Planets in Protoplanetary Disks

Using a near-infrared spectrograph attached to ESO’s Very Large Telescope, astronomers have been able to examine the inner protoplanetary disks around three interesting stars, with results showing the sheer diversity of the apparently emerging systems. Only a few million years old, all three stars could be considered analogs of our own Sun, going through processes like those that produced the Solar System some 4.6 billion years ago. The disks under study show regions where the dust has been cleared out, the possible signature of planetary influence.

The new work, which offers higher resolution than was earlier available, demonstrates that the previously known gaps in the dust still contain molecular gas, an indication that the dust has begun to form planetary embryos or that a planet has already formed and is clearing the disk gas as it orbits. The likely planets include a massive gas giant orbiting the star SR 21 at a distance of something less than 3.5 AU, and a possible planet around HD 135344B between 10 and 20 AU. The third star, TW Hydrae, may also show the development of one and possibly two planets. In the words of Klaus Pontoppidan (Caltech):

“Our observations with the CRIRES instrument on ESO’s Very Large Telescope clearly reveal that the disks around these three young, Sun-like stars are all very different and will most likely result in very different planetary systems.” 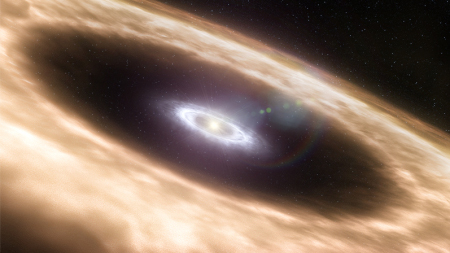 Image: Astronomers have been able to study planet-forming disks around young Sun-like stars in unsurpassed detail, using ESO’s Very Large Telescope. The studied disks were known to have gaps (represented by the brownish color in the image) but the astronomers found that gas is still present inside these gaps (represented by the white color in the image). This can either mean that the dust has clumped together to form planetary embryos, or that a planet has already formed and is in the process of clearing the gas in the disk. Credit: European Southern Observatory.

The techniques on display here, collectively called ‘spectro-astrometric imaging,’ are dazzling, allowing the researchers to see into the inner disk regions around stars that are more than 200 light years away, measuring distances down to one-tenth of an AU while simultaneously measuring the velocity of the gas. The disks themselves are about 100 AU across. Chalk up yet another win for adaptive optics, as the CRIRES spectrograph is fed by an AO module that corrects for atmospheric blurring, allowing high resolution. As good as these results are, they’ll be surpassed not many years from now by the ALMA (Atacama Large Millimeter/submillimeter) Array, whose operations commence in 2012.

Addendum: andy has passed along the link to the paper on this work, which is Pontoppidan et al., “Spectro-astrometric imaging of molecular gas within protoplanetary disk gaps,” accepted for publication in the Astrophysical Journal. The original ESO news release is here.