Direct Imaging and Its Exoplanetary Uses

As I taper back on my post-surgical medications (see yesterday’s post), a coherent universe is gradually coalescing around me once again. Still, I think I’ll take today relatively easy, looking at just one of the two stories I’ve been pondering during my brief convalescence. The first is intriguing not so much because of what it appears to be — a planet around another star, as imaged by the Gemini North Telescope on Mauna Kea — but rather because of where that planet seems to have formed. Have a look. 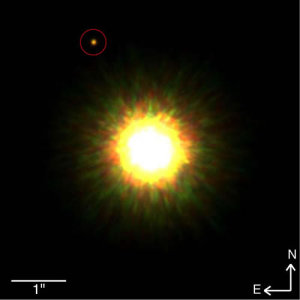 The image at right shows the torturously named 1RXS J160929.1-210524, a star some 500 light years from Earth, along with the apparent companion of that star. The team behind this work has been surveying a group of stars in the so-called Upper Scorpius association, a group of relatively young stars that formed some five million years ago. Gemini is equipped with adaptive optics capabilities that make finding different types of companions around such stars feasible. This one seems to be some eight times the size of Jupiter although much hotter than that planet (about 1500 C compared to Jupiter’s -110 C), orbiting a K7 star with a mass about 85 percent that of the Sun.

Image: Gemini adaptive optics image of 1RSX J160929.1-210524 and its likely ~8 Jupiter-mass companion (within red circle). This image is a composite of J-, H- and K-band near-infrared images. All images obtained with the Gemini Altair adaptive optics system and the Near-Infrared Imager (NIRI) on the Gemini North telescope. Photo Credit: Gemini Observatory.

Of course, the crucial thing is to find out whether or not this really is an orbiting object or a chance alignment, and a good deal of work will have to go into the proof. Also in need of serious study is the object’s distance from the star, which is 330 AU. That’s about ten times the distance between the Sun and Neptune. A planet at this distance is a bit of a surprise in terms of formation theories, but it’s not inconsistent with the separations of the few low-mass companions found by this method.

On the other hand, consider the limitations of our methods. Radial velocity and transit searches are effective primarily on planets orbiting within a few AU of their host stars. The question we’ve always had to ask is, just how representative are the systems we’re discovering? Direct imaging is in its infancy, but now it has delivered up a candidate planet at a seriously wide separation from a normal star (as opposed to a brown dwarf). It will be interesting to see how this plays out, bearing in mind direct imaging’s own limitation (at least at this point) of working best with nearby young stars and bright, hot planets.

Chances are that such wide separations will remain a rarity. Here’s a note on this from the paper:

Previous direct imaging surveys for planets around nearby solar-type stars have put upper limits of ∼6% on the fraction of stars with planets more massive than 5 MJupiter at separations over ∼50 AU… Our single detection of such a planet out of a sample of ∼80 stars is consistent with these results, and conﬁrms that planets on wide separations are rare also at ages of a few Myr.

As to confirming that this is indeed a planet bound to the star, the authors peg the likelihood of a free-floating planet falling within the observed parameters of this one to be only 3 X 10-4, making the scenario unlikely. Further study of other possible companions or the star’s debris disk may help nail down the identification, but the authors also note this interesting point: “For now, the very existence of the 1RXSJ1609-2105 system poses a challenge to theories of planet and star formation, and may well suggest that there is more than one mechanism in nature for producing planetary mass companions around normal stars.”

The paper is Lafrenière at al., “Direct Imaging and Spectroscopy of a Planetary Mass Candidate Companion to a Young Solar Analog,” submitted to Astrophysical Journal Letters and available here. You may also want to look at the Gemini Observatory news release.