When Worlds Collide, the 1932 novel of planetary catastrophe, presented the most extreme extinction event imaginable. A pair of wandering planets enters the Solar System, one on collision course with the Earth, the other destined to be captured into orbit around the Sun. The doughty crew of an escaping rocket, on their way to a new life on the captured world, can only watch in horror as the Earth is destroyed.

Now we learn about a ‘when worlds collide’ scenario that seems to have involved two mature, Earth-sized planets in a distant Solar System. The system in question is BD+20 307, originally thought to be a single star with a massive, warm dust disk, but now known to be a close binary orbiting the common center of mass every 3.42 days. Both stars are similar to the Sun in mass, temperature and size. Moreover, the system seems to have an age comparable to our own Sun, and the sheer amount of dust at roughly Venus to Earth distance is quite interesting.

We would expect the dust particles to be pushed outward from the stars by stellar radiation. That they have not been indicates that the event that produced them must have occurred relatively recently, perhaps within the past few hundred thousand years. A planetary collision is inferred from the evidence of a disk with a million times more dust than is found around our own Sun, says Gregory Henry (Tennessee State University):

“The planetary collision in BD+20 307 was not observed directly but rather was inferred from the extraordinary quantity of dust particles that orbit the binary pair at about the same distance as Earth and Venus are from our sun. If this dust does indeed point to the presence of terrestrial planets, then this represents the first known example of planets of any mass in orbit around a close binary star.” 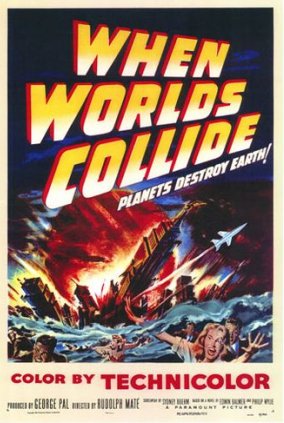 Once again we have a glimpse of how violent a planetary system can be, although destabilized planetary orbits in a mature system do seem to be rare. Henry goes on in this news release to discuss Jacques Laskar’s work in France and that of Gregory Laughlin (UCSC) and student Konstantin Batygin, whose models make it clear that planets even in our own system can go awry, with Mercury in particular prone to odd behavior if we extrapolate far enough into the future. The odds of collision are indeed small, but that also tracks with the rarity of mature, dusty systems like BD+20 307.

As to When Worlds Collide, I loved the 1951 film version of the Philip Wylie and Edwin Balmer novel as a kid, although it can only be said that the movie doesn’t age well, and a recent viewing made every bit of stilted dialog and lame character interplay all too apparent. Still, the story is captivating, and watching the team of determined scientists racing to complete a space ark in time to save at least a portion of humanity has its pleasures. I notice that a re-make is in the works, scheduled for 2010 or thereabouts. This one seems to posit a near-term collision between our system and the Alpha Centauri stars, so the odds on scientific verisimilitude don’t look good.