Rough Sailing on the Solar Wind 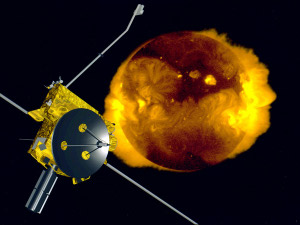 All of nature is a kind of laboratory, which is why good propulsion ideas can flow from astronomical observations that show us how things work. Recent news about the solar wind is a case in point. An analysis of data from the Ulysses spacecraft shows that the solar wind is now lower than at any time previously measured. That has implications for the heliopause, that region where the solar wind encounters true interstellar space, for this region plays a role in shielding the Solar System from the effects of galactic cosmic rays.

“Galactic cosmic rays carry with them radiation from other parts of our galaxy,” says Ed Smith, NASA’s Ulysses project scientist at the Jet Propulsion Laboratory in Pasadena, Calif. “With the solar wind at an all-time low, there is an excellent chance the heliosphere will diminish in size and strength. If that occurs, more galactic cosmic rays will make it into the inner part of our solar system.”

Cosmic rays can have ramifications on spacecraft engineering, especially when human crews are involved. As to propulsion, we have to be careful when talking about the solar wind. Sailing it is not similar to working with conventional solar sails, which use the momentum imparted by photons to move the spacecraft. The solar wind involves a much different medium, the stream of charged particles that flows at high speed from the Sun, attaining speeds anywhere from 350 to 800 kilometers per second. In this news release, David J. McComas (SwRI), principal investigator of the Solar Wind Observations Over the Poles of the Sun (SWOOPS) experiment on board Ulysses, confirms what Smith said:

This may sound like a more unusual story than it is. Earlier observations of the solar wind have made it clear that it can weaken and regain strength. We’re learning how the strength of the wind varies, with data from both Ulysses and the Advanced Composition Explorer spacecraft showing that the wind has weakened at all solar latitudes. But remember that Ulysses, which circles the Sun in a polar orbit, is only on the third such orbit since its 1990 launch, so we have a long way to go in compiling the kind of data that will give us a true perspective on wind strength.

Currently, the speed of the solar wind is roughly what it was at the previous minimum phase of the solar activity cycle, but its density and pressure are significantly lower. The findings have a bearing on several propulsion concepts. While we have ingenious proposals for solar wind-driven spacecraft, exactly how to make them work is more problematic than ever. A vessel using a self-generated magnetic field (possibly with plasma trapped within) as a sail could theoretically ride the wind at great speed to the outer Solar System, an idea that researchers like Robert Winglee have done much to investigate.

But the very inconstancy of the solar wind points to the question of how well we could control such a spacecraft. In their new book Solar Sails: A Novel Approach to Interplanetary Travel, Gregory Matloff, Les Johnson and Giovanni Vulpetti note that this variability makes sailing such a craft something like tossing a bottle with a note inside it into the surf at high tide, hoping the ocean will carry it to a specific destination. Because we don’t know how to control the result directionally, it’s clear that we have much work to do in sorting out the magsail concept as it relates to the solar wind. It remains promising, but beamed magsail designs seem to offer a far more straightforward deep space solution.