Into the Brown Dwarf Desert

At first glance, the object called COROT-exo-3b doesn’t seem all that interesting. True, planets that orbit remarkably close to their stars were a surprise when first detected, but we’ve since found enough of them to know that a gas giant in a four-day orbit, which is about how long this object takes to circle its star, is not a great rarity. We’ve also learned that radial velocity methods are going to detect large, close objects more quickly than planets that orbit farther from their primary. Why is COROT-exo-3b making news?

Then you look a little more closely at the new find. For one thing, the COROT mission depends not upon radial velocity measurements but planetary transits. More significantly, COROT-exo-3b is roughly the size of Jupiter but is fully twenty times as massive. Orbiting an F-class dwarf with metallicity values much like the Sun, the object opens up a new perspective, for we’ve found planets twelve times as massive as Jupiter and stars seventy times as massive, but nothing in the range in between. A brown dwarf or a planet? We’re in the so-called ‘brown dwarf desert’ between star and planet with this one. 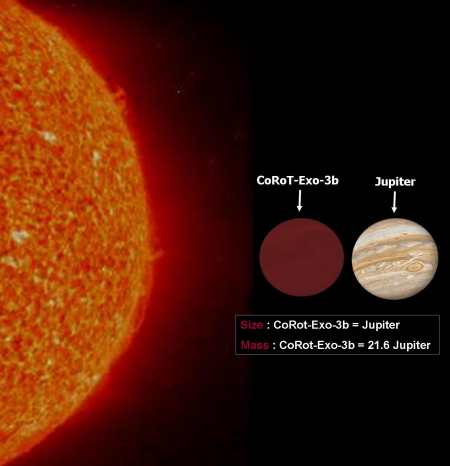 This discovery reminds us that we’re still trying to draw the line between planets and brown dwarfs, the latter being ‘almost’ stars that cannot sustain fusion at the core. Considered as a planet, COROT-exo-3b is the most massive and the densest yet found, and it raises questions about massive planetary formation in an environment this close to a star. Surely migration from further out in the system is at work here, but we have much study ahead before we can draw confident conclusions.

The paper on this work sums up the situation nicely:

CoRoT-Exo-3b reopens the debate about the existence of a hitherto non-detected brown-dwarf population at short orbital periods but also about the definition of a planet, such as the common one which, in this range of mass, relies on the deuterium burning limit. The exact nature of this new object is therefore still doubtful. Its parameters are in pretty good agreement with the model predictions for brown-dwarfs and if that is that case, it might simply be the ﬁrst secure and well-characterized object at the lowest mass end of the stellar population. If CoRoT-Exo-3b is indeed a brown-dwarf one should review as well the other massive planets like XO-3b, HAT-P2b and WASP-14b as potential members of this class. An alternative explanation is that CoRoT-Exo-3b belongs to a new, yet unexplored, very massive planet population, widening the variety of exoplanets. The currently ambiguous nature of CoRoT-Exo-3b makes it therefore a very worthwhile object for further deeper studies.

We can expect future COROT finds to aid these investigations. Indeed, the mission seems made to order for planets in short orbital periods. With the capability of monitoring up to 12,000 stars simultaneously in each observing run, covering a span of 150 days of nearly continuous observations, the instrument is obviously sensitive to such worlds, whose study can then be followed up with radial velocity techniques.

The paper is Deleuil et al., “Transiting exoplanets from the CoRoT space mission VI. CoRoT-Exo-3b: The first secure inhabitant of the brown-dwarf desert,” accepted for publication in Astronomy & Astrophysics (abstract).