Finding Terrestrial Worlds in the Dust

Computer simulations are showing us how to detect the signature of Earth-like planets — indeed, planets nearly as small as Mars — around other stars. That interesting news comes out of NASA’s Goddard Space Flight Center, where a supercomputer named Thunderbird has been put to work studying dusty disks around stars similar to the Sun.

Varying the size of the dust particles along with the mass and orbital distance of the planet, the team led by Christopher Stark (University of Maryland) ran 120 different simulations.

“It isn’t widely appreciated that planetary systems — including our own — contain lots of dust,” Stark says. “We’re going to put that dust to work for us.”

Indeed. Useful and observable things happen as dust responds to the forces acting upon it. For one thing, starlight can exert a drag that causes dust particles to move closer to the parent star. More to the point, particles spiraling inward can become involved in orbital resonances with planets in the system. A resonance like this is what happens when periodic gravitational influences go to work on orbiting objects. Particles that make three orbits around their star as a planet makes one, for example, will over time settle into identifiable structures, a complex dance that is played out with vast numbers of such particles. 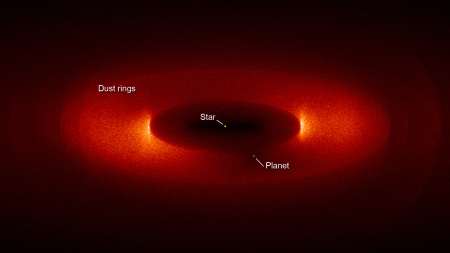 Stark believes that this work will be useful as we study dust structures around exoplanets, particularly via future space platforms like the James Webb Space Telescope. Certainly the idea appears promising, as it means using dust that might otherwise complicate direct imaging attempts as a solution rather than a problem, capable of detecting planets down to a few times the mass of Mars. The paper is Stark and Kuchner, “The Detectability of Exo-Earths and Super-Earths Via Resonant Signatures in Exozodiacal Clouds,” Astrophysical Journal 686 (October 10, 2008), pp. 637–648 (abstract). Stark’s Exozodi Simulation Catalog is available online.