Two asteroid belts around Epsilon Eridani? So we learned yesterday, a fascinating find and one I want to discuss today, but only after celebrating Epsilon Eridani itself. Can any star have a more interesting pedigree? This is one of the Project Ozma stars, the other being Tau Ceti, that Frank Drake targeted in the first attempt to listen in on extraterrestrial civilizations. The Centauri stars seemed less likely then, in an era when multiple systems were thought to be hostile to planetary formation. But Epsilon Eridani and Tau Ceti were both single, Sun-like stars, surely possible homes to planets not much different from ours.

Or so we thought. We’ve since learned that Tau Ceti’s chances as a home to flourishing civilizations are diminished by the likelihood of intense cometary bombardment, while Epsilon Eridani itself is young enough (850 million years) that any parallel with our own Solar System, where life has had billions of years to attain technology, breaks down. But these stars are close enough to us to make them realistic targets for interstellar probes, assuming we develop the needed technologies and have the will to launch them. And if exploration in our own system has taught us anything, it’s that we should be prepared to be surprised, no matter how well established are our preconceptions.

So we move 10.5 light years in the direction of the constellation Eridanus to a star that looks a lot like ours once did, a point that Massimo Marengo (Harvard-Smithsonian Center for Astrophysics) is quick to note. “Studying Epsilon Eridani is like having a time machine to look at our solar system when it was young,” says Marengo, co-author of the discovery paper. That calls up the possibility that this system may evolve as ours has, perhaps one day yielding civilizations of its own, even if none were available for Frank Drake to overhear in 1960.

The new findings show that Epsilon Eridani has an asteroid belt at a distance of some 3 AU, more or less in the same place as the asteroid belt around our Sun. A second belt, found using the Spitzer Space Telescope, exists at about 20 AU, in the area where Uranus orbits in our system. Still further out, extending some 35 to 100 AU from the central star, is a ring of icy materials reminiscent of our own Kuiper Belt, but holding 100 times more material. Current thinking is that when the Sun was Epsilon Eridani’s age, the Kuiper Belt looked more or less the same, with much of its material swept away in the Late Heavy Bombardment. 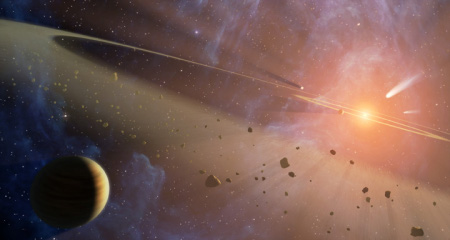 Image: This artist’s conception shows the closest known planetary system to our own, Epsilon Eridani. Observations from NASA’s Spitzer Space Telescope show that the system hosts two asteroid belts, in addition to previously identified candidate planets and an outer comet ring. The system’s inner asteroid belt appears as the yellowish ring around the star, while the outer asteroid belt is in the foreground. The outermost comet ring is too far out to be seen, but comets originating from it are shown in the upper right corner. Credit: NASA/JPL-Caltech.

The intriguing gaps between the rings of material around this star are laden with possibility. We already have some radial velocity evidence for the existence of a Jupiter-mass planet in an elliptical orbit with a semi-major axis of 3.4 AU and an orbital period of 6.9 years. That would place this world near the location of the innermost belt identified in this work. But it would also create a problem, according to the paper: Ranging from 1 AU to 5.8 AU as it moves through its orbit, such a planet “…would quickly clear that region not only of dust particles but also the parent planetesimal belt needed to resupply them, inconsistent with the dust distribution implied by the Spitzer observations.” The problem can be eased if the degree of this planet’s orbital eccentricity is diminished, which would allow an orbit entirely within the innermost belt.

The paper goes on to offer the evidence for three possible planets in this system:

Planet A: the long-suspected but still unconfirmed Jovian-mass planet with aorb = 3.4 AU that may be associated with the innermost warm debris belt detected by Spitzer. Planet B: also perhaps Jovian-mass, associated with the second warm debris belt at r ∼ 20 AU inferred in this paper, also possibly helping define the sub-mm ring inner edge via 2:1 resonance, keeping the zone between 20 and 35 AU clear… Planet C: located at r ∼ 35 AU, with mass less than a few × 0.1 MJup according to dynamical models, preventing small grains from drifting inward past the inner edge of the sub-mm ring.

It’s intriguing to note that while Spitzer would not have been able to detect it, at least one of these worlds may be within range of the James Webb Space Telescope, scheduled for launch in the next decade. The image below shows a comparison between our Solar System and what we’ve thus far discovered around Epsilon Eridani. Note the size of that outer belt of icy materials compared to the Kuiper Belt! 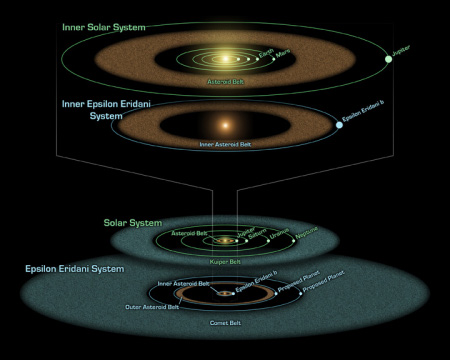 Image: This artist’s diagram compares the Epsilon Eridani system to our own solar system. The two systems are structured similarly, and both host asteroids (brown), comets (blue) and planets (white dots). Credit: NASA/JPL-Caltech.

Both of the inner planetary possibilities orbit near the rim of one of the asteroid belts, and the third would be located near the rim of the outer ring of comets. Future work should tell us much more, including the ever lively question of whether terrestrial worlds may lurk inside the innermost asteroid belt. Whatever the case, a star close enough to be an early target for any interstellar technology we develop will always hold our interest. The paper is Backman et al., “Epsilon Eridani’s Planetary Debris Disk: Structure and Dynamics based on Spitzer and CSO Observations,” slated for publication in The Astrophysical Journal and available online.