A Surprising Find from the Early Solar System

As if we didn’t have enough trouble piecing together how planets form, we’re now learning that objects much smaller than planets — the planetesimals that collide and agglomerate to form planet-sized objects — can be the subject of melting. The work, led by Benjamin Weiss at MIT, suggests that objects on the scale of 160 kilometers across were large enough to melt almost completely, a counter-intuitive notion that would explain the magnetism found in certain meteorites, which until now has remained a mystery. Weiss’ team studied the record of this magnetic field as preserved in three angrite meteorites from the early Solar System. 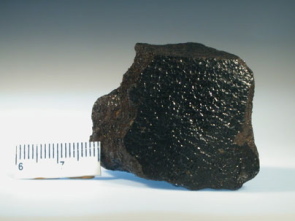 Such study is known as paleomagnetism, examining the record of magnetic fields as preserved in various magnetic minerals, and the angrites involved are thought to record the earliest stages of planet formation. The record of their magnetism extends beyond the lifetime of the early circumstellar disk, leading Weiss to conclude that the fields were produced in their parent body. In a molten planetesimal, heavier iron-rich materials would sink into the core to produce a magnetic dynamo, while lighter materials, including silicates, would have floated to the surface to form a crust. That’s quite a break from earlier thinking, in which planetesimals made up of unmelted rocky material showed no large-scale structure. Weiss believes, nonetheless, that some planetesimals were “…mini-planets themselves, with crusts and mantles and cores.”

Image: A picture of the first discovered (and therefore eponymous) angrite “Angra dos Reis”; which was observed to fall from the sky in 1869 near the town of Angra dos Reis in Brazil. The black, shiny face was produced from melting of the meteorite’s surface during passage through Earth’s atmosphere. Scale bar is in centimeters. Credit: Maria Zucolotto (Museu Nacional; Brasil).

Thus the emerging picture: Small, molten bodies collide to build up planets, a process that could change how we see today’s distribution of minerals in the Earth’s crust, mantle and core. The analysis shows that events moved so swiftly in the early Solar System that some of the sample angrite meteorites Weiss studied formed from a parent body with a magnetic field twenty to forty percent as strong as Earth’s current magnetic field. The team’s analysis shows the record of the angrite magnetic field going back from 4564 to at least 4558 million years.

Adds Weiss: “We are used to thinking of dynamo magnetic fields in rocky bodies as uncommon phenomena today. But it may be that short-lived planetesimal dynamos were widespread in the early solar system.” The paper is Weiss et al., “Magnetism on the Angrite Parent Body and the Early Differentiation of Planetesimals,” Science Vol. 322, No. 5902 (31 october 2008), pp. 713-716 (abstract). See also this MIT news release.