A Balloon in Titan’s Skies

The pace of change being what it is, adjusting our time frames can be a difficult task. That’s particularly true in the planning of space missions, where the gap between what we seem able to do and the actual window for doing it can become as large as it is frustrating. NASA and the European Space Agency, for example, will make a choice in 2009 between a Jupiter/Europa mission and a project called the Titan and Saturn System Mission (TSSM). Whichever is chosen, the projected launch date is at least twelve years away, with arrival expected no earlier than 2030. The lengthy interval is the inevitable result of the complexity of mission planning and the realities of orbital mechanics. 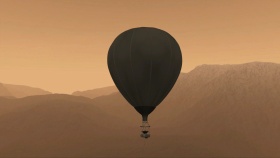 We’re always in a hurry about space missions because we’re so anxious for new information, but absent propulsion breakthroughs, we’re still tied to multi-decade planning cycles. Even so, as we investigate ways to fly missions faster, the prospect of what we might do with the Titan and Saturn mission looms large. An interesting article in Astrobiology Magazine looks at TSSM and notes its multiple objectives: To deploy an orbiting spacecraft around Titan, to explore its surface through a dedicated probe, and to examine its landscapes via a hot air balloon.

This would be a tricky mission, one that recognizes, among other things, the challenges of a soft landscape that could trap a robotic rover. Current thinking is that a helicopter rotor could be used to move the surface probe from one location to another, or that it could be equipped with flotation devices in the event that a splashdown in a hydrocarbon lake is made the objective. The Huygens probe, for all its success, was not equipped to do surface science to any degree, so putting a probe into this terrain is needed to understand Titan’s surface chemistry.

A Titan orbiter, meanwhile, would substantially add to what Cassini has already done. Our views of Titan from the descending Huygens were spectacular, with liquid methane rivers winding down icy slopes amidst the hydrocarbon haze, but while Cassini has been able to peer through the atmosphere with radar, it’s unable to see large parts of the surface. Thus Athena Coustenis (Paris Observatory), who is involved in TSSM mission design:

“We need a Titan-dedicated orbiter because after four years of Cassini, we still haven’t mapped more than 25 percent of Titan’s surface. When you see the diversity the moon has, you realize it needs full-coverage mapping. And we can have a polar orbiter, whereas Cassini only passes by Titan on the ecliptic.”

The balloon concept is particularly intriguing. You may remember reading about a 1983 NASA workshop at which the idea of seeding the atmosphere of Titan with floating laboratories was discussed. A large balloon or powered blimp would move through the skies while dispersing smaller balloons to operate between ten and 100 kilometers above the surface. The TSSM concept is not quite so grand but seems more realistic, with a pared down mission scenario that builds upon our experience with Cassini and Huygens. The latest TSSM update has this to say:

We are now in the phase of describing our study of the past year for a return to Titan and the Saturnian System (TSSM) in extensive reports that will allow the science committees appointed by NASA and ESA agencies to evaluate the interest and feasibility of the mission. The Joint Science Definition Team (JSDT), and engineers have been working hard on putting together these reports and on defining the science, as well as the measurement requirements related to our ambitious mission, which comprises a dedicated Titan orbiter, and two in situ elements: a hot-air (Montgolfière) balloon and a Mare lander. The balloon is to fly over Titan’s mid latitudes at 10 km altitude for about 6 months, while a short-lived probe will land in a north-polar lake. The CNES French Agency has committed to supplying a large part of the balloon, and is actively studying the Montgolfière. For the lander, the flourishing heritage from Huygens is of great benefit to implementation of the mission as the orbiter heritage from Cassini.

Despite all our recent work, Titan remains in so many ways an enigma. Yes, we see geophysical processes that remind us of Earth, and a methane cycle that corresponds to the hydrological cycle on our own planet. Is there a form of volcanism on Titan involving water ice and ammonia? Is Titan’s climate stable or changing even as we study it? A free-ranging balloon could tell us so much about the processes at work here, while probe concepts ranging from a long-lived equatorial lander to a short-term probe destined for a northern lake would firm up our understanding of conditions at the surface. This is an ambitious mission whose progress through the funding minefield we’ll watch with interest.