Are we really moving beyond indirect detection methods to being able to produce actual images of extrasolar planets? Apparently so, as witness the first direct images of multiple planets around a normal main sequence star. And on the same day, we have the announcement of a visible light image of a Jupiter-class planet orbiting the star Fomalhaut, one suspected for several years because of the sharply defined inner edge of the dust belt around the star. A planet in an elliptical orbit affecting the debris disk had been thought to be offsetting the inner edge of the belt.

Let’s go to the planets found around the dusty young star HR8799 first. They range from seven to ten times the mass of Jupiter. Bruce Macintosh (Lawrence Livermore National Laboratory), one of the authors of a new paper on the achievement in Science Express, explains its significance:

“Every extrasolar planet detected so far has been a wobble on a graph. These are the first pictures of an entire system. We’ve been trying to image planets for eight years with no luck and now we have pictures of three planets at once.”

Radial velocity methods can tell us much, including not only the presence of a planet but also something about its mass and orbit. But these methods work best when the separation between the star and the planet is relatively small, usually within the range of 5 AU. What we have here are three worlds quite a distance from their primary, at 24, 37 and 67 AU respectively. By comparison, Neptune is about 30 AU from the Sun in our Solar System. The star, a blue A-class object, retains a sizable disk, and its planets are young enough to be throwing a bright infrared signature. The results of observing same appear immediately below: 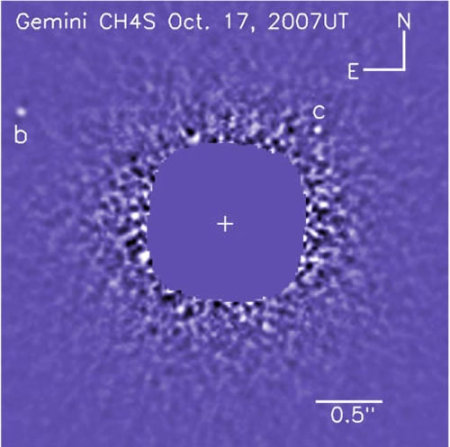 Image: Gemini Observatory discovery image using the Altair adaptive optics system on the Gemini North telescope with the Near-Infrared Imager (NIRI). Image shows two of the three confirmed planets indicated as “b” and “c” on the image. “b” is the ~7 Jupiter-mass planet orbiting at about 70 AU, “c” is the ~10 Jupiter-mass planet orbiting the star at about 40 AU. Due to the brightness of the central star, it has been blocked and appears blank in this image to increase visibility of the planets. Credit: Gemini Observatory.

HR8799 is relatively nearby at 130 light years, visible using binoculars or a small telescope (or even via the naked eye, depending on your seeing conditions). Close enough to find, and perhaps image, other planets in this interesting system? It’s a distinct possibility, and with ever more powerful adaptive optics systems going into place via the Gemini Planet Imager, we’ll boost our capabilities a hundred times. Says Macintosh:

“I think there’s a very high probability that there are more planets in the system that we can’t detect yet. One of the things that distinguishes this system from most of the extrasolar planets that are already known is that HR8799 has its giant planets in the outer parts – like our solar system does – and so has ‘room’ for smaller terrestrial planets – far beyond our current ability to see – in the inner parts.”

Interesting indeed, and note that we’re already doing spectroscopy to study these three planetary atmospheres. Bear in mind, too, that the work on this star is part of a survey of eighty young, dusty stars located not far from the Sun. Because the HR8799 planets showed up after observations on only a few, we may discover that Jupiter-class worlds at these separations are not uncommon among more massive stars.

Imaging planets around young stars like this one is by no means an easy task, but as we move to older systems with planets well beyond their early formation stage, the game will only get tougher. HR8799, a star with a dust disk more massive than any star within 300 light years from Earth, is a harbinger of necessary instrumentation tune-ups to come as we extend the search for exoplanetary images from Earth into advanced space missions. But for now, what a job by astronomers using adaptive optics at Gemini North and the Keck Observatory!

As to Fomalhaut b, clearly defined in the Hubble Space Telescope image below, the evidence seems strong indeed that we are looking at a actual planet. James Graham (UC Berkeley), a co-author of the paper on this work, has little doubt: “It will be hard to argue that a Jupiter-mass object orbiting an A star like Fomalhaut is anything other than a planet.” 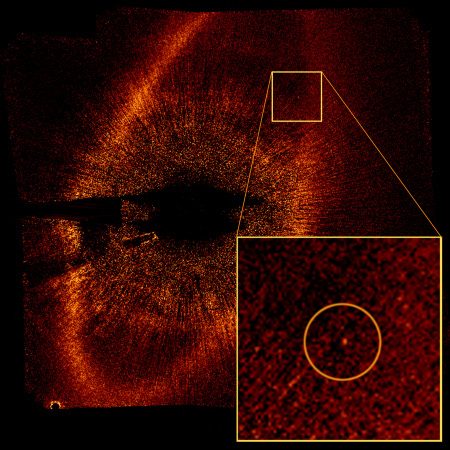 Image: This 2006 Hubble Space Telescope optical image shows the belt of dust and debris (bright oval) surrounding the star Fomalhaut and the planet (inset) that orbits the star every 872 years and sculpts the inner edge of the belt. A coronagraph on the Advanced Camera for Surveys blocks out the light of the star (center), which is 100 million times brighter than the planet. Credit: Paul Kalas/UC Berkeley; STScI.

Its brightness also argues that Fomalhaut b has a particularly intriguing property. Paul Kalas (also at UC Berkeley), has this to say:

“To make this discovery at optical wavelengths is a complete surprise. If we’re seeing light in reflection, then it must be because Fomalhaut b is surrounded by a planetary ring system so vast it would make Saturn’s rings look pocket-sized by comparison. Fomalhaut b may actually show us what Jupiter and Saturn resembled when the solar system was about a hundred million years old.”

The researchers believe they can constrain the planet’s mass to between 0.3 and 2 Jupiter masses, noting that a more massive object would destroy the dust belt around Fomalhaut. Like HR8799, Fomalhaut is a young star — about 200 million years old — and will have a short lifetime of perhaps a billion years. Sixteen times brighter than the Sun, the star would appear about as bright from the new planet as our Sun does from Neptune even though the distance to HR8799 is four times greater. Fomalhaut b is also a mysterious place in at least one sense: It has dimmed by half a stellar magnitude from 2004 to 2006, perhaps an indication of a hot outer atmosphere affected by convection cells.

So there we are. Not just an exoplanet directly imaged in visible light, but one with a ring system that may well resemble what Jupiter’s must have been like before the large Galilean satellites coalesced. Here again, note the observational constraints. The radial velocity method would not have allowed Kalas and team to have made this detection — the planet is simply too far from its star and too low in mass. And while infrared would seem to be the tool of choice to detect hot young worlds like this one, the planet’s great distance from its star made a visible light image possible.

Previous post: An Inflatable Sail to the Oort Cloud