The images of planets around Fomalhaut and HR8799 carried more clout than I expected, with traffic to the site quadrupling when the story ran, and substantial coverage from major media outlets as well. I ran the exciting images of both stars and their companions, but because I enjoy astronomical artwork, I now want to include the visualization below, showing Fomalhaut b surrounded by a large ring of autumnal russet and gold. Note, too, the extensive debris disk surrounding the distant star. Orbiting every 872 years, Fomalhaut b lies some 2.9 billion kilometers inside that disk’s inner edge. 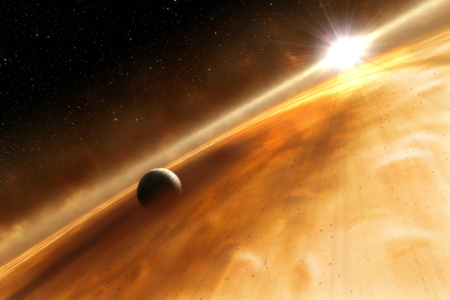 Greg Laughlin (University of California, Santa Cruz) was surprised at the even-handed media treatment of HR8799, considering the brightness of Fomalhaut (‘A star with a name like a rocket’), not to mention the acknowledged skills of the Hubble Space Telescope’s media office. But while HR8799 isn’t exactly a household word, the faint object trumps Fomalhaut in sheer numbers. Imagine being able to announce that you’ve imaged not one but three planets at the same time! We’re getting better at this, and as more eyes focus on young systems bright in the infrared, we’ll doubtless be snaring more examples of multiple worlds forming around their stars.

Laughlin is an ace exoplanet hunter whose systemic site should be on your priority list, and I was glad to see that he turned his attention to the question of planetary formation around these two stars, for the new planets are gas giants that make us take another look at planet formation. A news release from the Hubble site noted this point in relation to Fomalhaut b:

The conventional model (insofar as anything can be considered ‘conventional’ in this fast-moving field) of gas giant formation is that it occurs through core accretion, meaning that a massive solid core eventually builds up out of much smaller pieces. Early dust and debris gradually become rocky planetesimals which, in turn, collide and coalesce. But does this have time to happen in the distant outer reaches of a nascent solar system, a place where the disk is thinner and intense stellar radiation can cause it to dissipate quickly? Gravitational instability offers the counter-model: Instabilities in the debris disk cause quick collapse of matter into planets that can form in a matter of a few millennia.

Laughlin’s take on this relates the new planets to an interesting exoplanet detection by Bunei Sato:

Sato’s detection in early 2007 of a 7.6 Jupiter-mass planet orbiting Epsilon Tauri (2.7 solar masses) in the Hyades is probably a good example of the type of planet that’s showing up in these new images, and Eps Tau b provides good support for the case that this category of objects arose from gravitational instability. The Hyades were a tough environment for planet formation via core accretion, due to the intense UV radiation that caused the disks to lose gas quickly…

And there are ways we might firm up this model:

Remnant debris disks would be expected around young stars that had massive enough disks to trigger gravitational instability. Also, in general, the more massive the star, the more massive the disk. And finally, if the planets formed via gravitational instability, one wouldn’t expect a bias toward high metallicity. If this idea is correct, as more of these planets are imaged, there shouldn’t be a metallicity correlation with the parent star.

Both models of planet formation seem robust in particular environments. Laughlin notes that, if the planets that circle HR8799 really were formed by gravitational instability, then our own Solar System’s gas giants, which formed through core accretion, would have less in common with them than with ‘hot Jupiter’ systems like 51 Peg, where the relevant gas giant was also the result of core accretion. Odd to think we have something in common with such bizarre systems… For more, check this helpful page of links to HR8799 materials, including images and movies, that the discovery team has made available. But look fast — I have no idea how long this temporary page will be up.