Images of distant exoplanets, once only a wish for future space missions, have begun to turn up with a certain regularity. The three planets around HR8799 and the single gas giant around Fomalhaut were announced on the same day, while a week later we once again have Beta Pictoris in focus, a young star so well studied that images of its dust disk go back to the mid-1980s. A new analysis of 2003 data from the Very Large Telescope now brings a team of French astronomers to offer a probable — but not certain — image of what may turn out to be Beta Pictoris b.

The observations seem to show a gas giant some eight times more massive than Jupiter, orbiting at roughly 8 AU, not far inside Saturn’s orbit in our own Solar System. But astronomer Gael Chauvin (Laboratoire d’Astrophysique de l’Observatoire de Grenoble) is quick to qualify the finding:

“We cannot yet rule out definitively, however, that the candidate companion could be a foreground or background object. To eliminate this very small possibility, we will need to make new observations that confirm the nature of the discovery.” 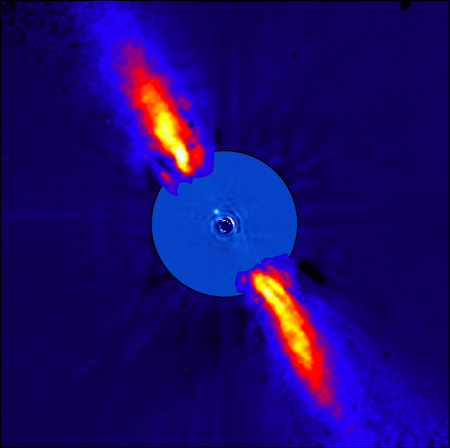 Image: This composite image represents the close environment of Beta Pictoris as seen in near infrared light. This very faint environment is revealed after a careful subtraction of the much brighter stellar halo. The outer part of the image shows the reflected light on the dust disc, as observed in 1996 with the ADONIS instrument on ESO’s 3.6 m telescope; the inner part is the innermost part of the system, as seen at 3.6 microns with NACO on the Very Large Telescope. The newly detected source is more than 1000 times fainter than Beta Pictoris, aligned with the disc, at a projected distance of 8 times the Earth-Sun distance. Because the planet is very young, it is still hot, with a temperature around 1200 degrees C. Both parts of the image were obtained on ESO telescopes equipped with adaptive optics. Credit: ESO/A.-M. Lagrange et al.

Take note of this in the above statement: The source is more than 1000 times fainter than Beta Pictoris — remember that this is at infrared wavelengths, where the contrast between the primary and candidate planet is minimized. A look at this same system in visible light would come up short, as the star’s glare would drown out any planetary signature.

That ‘small possibility’ of a spurious identification seems even smaller when you consider that an examination of Hubble archives turned up nothing by way of a foreground or background object. Moreover, the candidate object is in the plane of the disk, with the right mass and distance to meld with what we’ve already learned about this well studied environment. Beta Pictoris b would be closer than any planet we’ve found via direct imaging, an object bright in the infrared around a young star (12 million years old) that is still growing its planetary system. Refining our detection methods for cooler and older planets should widen the field of directly imaged worlds and offer new data on planetary formation.

Here’s a chart showing candidate planetary systems that have been imaged to this point (you’ll need to click to enlarge): 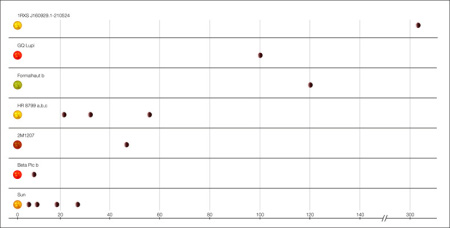 Image: This diagram compares the various candidate planetary systems that have been imaged with our own Solar System. Indicated are the star and the position of the candidate planets. The probable planet around Beta Pictoris is the closest to its host star of all extra-solar planets yet imaged, and is comparable to Saturn as far as its distance is concerned. The scale is the distance between the Earth and the Sun. A list of all candidate exoplanets directly imaged can be found at here. Credit: ESO

I don’t see the paper up on the arXiv server yet, but look here for a preprint. Submitted to Astronomy & Astrophysics, it’s Lagrange et al., “A probable giant planet imaged in the β Pictoris disk. VLT/NACO Deep L-band imaging.”