Building for the Long Haul

When you’re thinking long-term, a period of 5.7 years seems like a mere blip in time. But NASA’s Long Duration Exposure Facility, deployed from the shuttle Challenger in 1984 and returned to Earth after 32,422 orbits, is a small-scale experiment that points to much weightier objectives. Think about the Voyager spacecraft, launched in 1977 and still operational after thirty-one years. Now ponder journeys to the heliopause and beyond, and potential missions to other stars that could last centuries. To learn how materials hold up in the space environment, we use tools like LDEF to collect data that can be gathered nowhere else.

57 experiments were mounted in 86 trays on the outside of the spacecraft, involving more than 200 principal investigators from private companies, universities, NASA centers, the Department of Defense and eight foreign countries. The idea was to study what happened to various materials when they were exposed to space, and as the Long Now Foundation’s Kevin Kelly noted earlier this year, each of the 86 panels has a certain ‘geeky modernist charm,’ the sort of look that wouldn’t be out of place at the trendiest modern art venues. Here you can see some of the panels on the LDEF spacecraft during the orbital experiment. 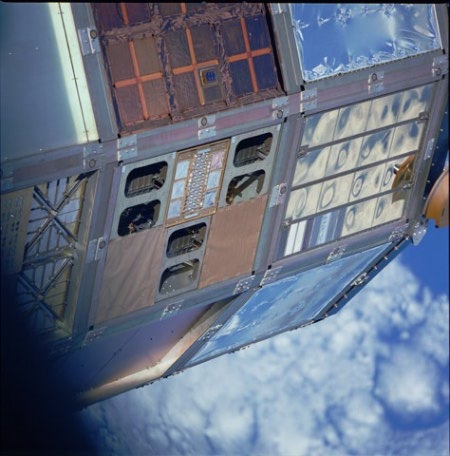 Indeed, writer and artist Jaime Morrison was so taken with these panels that he created an online gallery of them. For him, the LDEF spoke on many levels:

…it brings to mind the abstraction of certain painters, a gridded and measured minimalism in graphic design, failed utopian architecture, and the shapes and surface textures of every science fictional interior ever put on film. Add to that the subtle color palette peppered here and there with super saturated counterpoints, the unintentional, almost accidental, nature of its beauty, and (having been well battered during its 32,422 Earth orbits) the indelible stamp of decay… 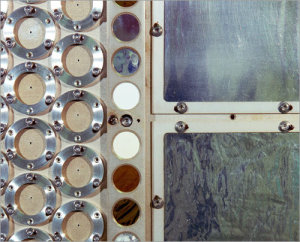 And indeed, these LDEF panel shots are unforgettable in their own way. High technology as art is part of the human impulse, one that will surely accompany us on our way to the stars. The LDEF, along with the current Materials International Space Station Experiment (MISSE), is part of the enterprise of developing long-term solutions to problems, learning how to build structures that can experience space not for years or even decades but centuries. The distances involved in exploring the outer Solar System and beyond demand such thinking, not to mention the real possibility that we will one day choose to deploy large structures in space or on other worlds not just for research but lifelong habitation.

But there is another long-term issue that these panels speak to. Science itself proceeds through the efforts of researchers whose work contributes in ways small or large to the breakthroughs that actually make the news and change the course of civilizations. A breakthrough in interstellar propulsion would open possibilities we only dream about today, but if it comes, such a breakthrough may not appear for decades or centuries. The chastening demand of science is that without knowing the result, we continue to labor at the details, knowing that we may be playing only a small part in what could become an outcome that benefits all of humanity. Can the modern ego, fixated on quick gratification and immediate results, continue to adapt to what Tennyson called ‘the long result of time?’ 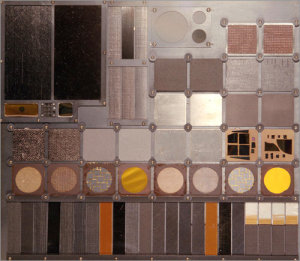 Let’s hope and assume so. The danger of demanding quick fixes, as desirable as they may be, is that if they do not emerge, we may lose track of the ultimate goal, and of the fact that science is not about ego or personal success as much as it is about moving knowledge forward. Ad astra incrementis, the motto of the Tau Zero Foundation, reminds us that steps taken one by one must accumulate to produce the desired result, or as Lao-Tsu once said, “You accomplish the great task by a series of small acts.” And you do this without knowing whether you will see the outcome, or whether it will be reserved for your great-grandchildren or even, perhaps, theirs. In the grand scheme, what matters more than yourself is the goal.