The phrase ‘liquid water’ is enough to quicken the pulse of the steeliest-eyed astrobiologist. We’ve long defined the concept of a habitable zone — that zone around a star in which life might flourish — by the presence of liquid water at the surface. But as we start pondering liquid water beneath the ices of outer satellites like Europa, we extend our investigations in exciting new ways. No wonder the new evidence of liquid water inside Enceladus received such attention in the mainstream media before the terrible news from Mumbai took center stage. 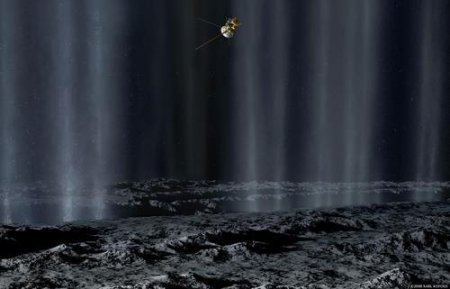 On one level, liquid water on such cold, distant worlds is exciting because of the possibility of finding life that has arisen completely independent of what happened on Earth. At another, it’s energizing because it raises the prospect of other places where we might get further surprises. Joshua Colwell (University of Florida), who works on the Ultraviolet Imaging Spectrograph (UVIS) team supporting the Cassini mission, says it well:

“There are only three places in the solar system we know or suspect to have liquid water near the surface. Earth, Jupiter’s moon Europa and now Saturn’s Enceladus. Water is a basic ingredient for life, and there are certainly implications there. If we find that the tidal heating that we believe causes these geysers is a common planetary systems phenomenon, then it gets really interesting.”

Interesting indeed. Those remarkable geysers emanating from Enceladus’ south pole could involve water vapor escaping from a liquid underground source, becoming ice grains as they make their way through cracks in the crust. The recent work shows that the water vapor forms narrow jets as it emerges, a finding that seems to demand temperatures close to the melting point of ice to account for the observed behavior. The study was made during a stellar occultation as the plumes passed in front of the distant binary star Zeta Orionis, measuring the jets’ water vapor content and density (the secondary star was not a factor in the observations).

Four high-density water vapor jets were revealed against the background plume in this study, and it is their density and presumed temperature that support the liquid water model. All of which is enough to keep Enceladus squarely in Cassini’s sights as the spacecraft continues its extended mission, which lasts for two more years. The paper looks at competitive models, including the possibility that the jets are caused by the evaporation of volatile ices that are exposed to space when new vents open on Enceladus. It’s compelling that the timing of the jets in relation to the moon’s orbit around Saturn fails to coincide with this tidal model, but we have much to learn before declaring Enceladus a likely abode for life.