I first encountered the surface of Jupiter decades ago, in a study hall in John Burroughs School in St. Louis, Missouri. It was a warm spring day and I was theoretically trying to bone up for a math test two periods hence. But deciding to squeeze in a little reading before I hit the algebra, I read the paragraphs that follow and spent little of the next two hours thinking about anything else:

The wind came whipping out of eastern darkness, driving a lash of ammonia dust before it. In minutes, Edward Anglesey was blinded.

He clawed all four feet into the broken shards which were soil, hunched down and groped for his little smelter. The wind was an idiot bassoon in his skull. Something whipped across his back, drawing blood, a tree yanked up by the roots and spat a hundred miles. Lightning cracked, immensely far overhead where clouds boiled with night.

As if to reply, thunder toned in the ice mountains and a red gout of flame jumped and a hillside came booming down, spilling itself across the valley. The earth shivered. 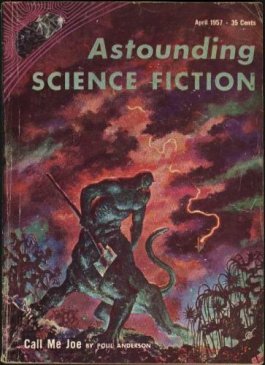 Thus the opening of Poul Anderson’s “Call Me Joe,” published in Astounding Science Fiction in April of 1957, though I was reading it in a later anthology. “…a tree yanked up by the roots and spat a hundred miles…” — hard to keep your mind on studying after reading that! The cover illustration at left gives you an idea of the images this story creates as it follows the exploration of the Jovian surface by remote telepresence technologies. I couldn’t help recalling these images as I looked through new work on Jupiter’s core. Computer simulations studying what happens to hydrogen/helium mixtures at the extreme pressures and temperatures of Jupiter’s interior imply a rocky core of 14 to 18 Earth masses, a twentieth of the planet’s total mass.

I had more or less gotten used to the idea that there was no core in Jupiter at all, although some recent theories had suggested a smaller core of about seven Earth masses. Anderson’s bizarre life-forms, some native and some created by humans, move through a low-temperature world that eventually absorbs the story’s protagonist (you have to read this story if you haven’t already), but the reality of Jupiter may be far stranger, and certainly more complex than we fully understand. And it certainly seems to preclude wandering about on any kind of surface.

It now appears that the pressure and temperatures involved within the planet change hydrogen from a molecular to a metallic state, producing a material with high electrical conductivity that gives rise to the intense magnetic field. The core, in this latest view, would be made of metals, rocks and ices of methane, ammonia and water, with an Earth-like ball of iron and nickel at the very center. Burkhard Militzer (University of California, Berkeley) sums up the work this way:

“Our simulations show there is a big rocky object in the center surrounded by an ice layer and hardly any ice elsewhere in the planet. This is a very different result for the interior structure of Jupiter than other recent models, which predict a relatively small or hardly any core and a mixture of ices throughout the atmosphere… Basically, Jupiter’s interior resembles that of Saturn, with a Neptune or Uranus at the center.” 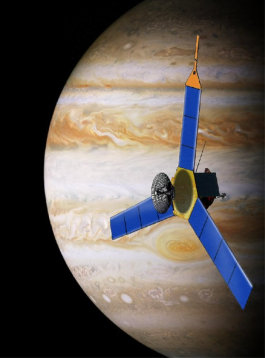 And that big rocky core gives an affirmative nod to the core accretion model of planetary formation, formed as it would have been by the collision of planetesimals from the primordial solar nebula. All of which is exciting stuff, but how much better to realize that the Juno mission to Jupiter, scheduled for a 2011 launch, should be able to return hard data to confirm or modify the new model. Juno will enter a highly elliptical polar orbit around the planet, studying the core question along with the planet’s magnetic field. Says Caltech’s Dave Stevenson:

“Juno’s extraordinarily accurate determination of the gravity and magnetic fields of Jupiter will enable us to understand what is going on deep down in the planet. These and other measurements will inform us about how Jupiter’s constituents are distributed, how Jupiter formed and how it evolved, which is a central part of our growing understanding of the nature of our solar system.”

Image: The Juno spacecraft in front of Jupiter. Juno is one of the largest planetary spacecraft to ever be launched. Credit: NASA.

Jupiter’s structure, then, can be critical in helping us understand how giant planets form, providing a way to look back at the early history of the Solar System. We’ll also learn about the relative abundance of water and oxygen, and gather data about the planet’s gravitational field and polar magnetosphere. Juno will use an Earth flyby for a gravity assist two years after launch, with arrival in Jupiter space in 2016. And rather than drawing on Radioisotope Thermal Generation (RTG) power, Juno will tap three solar panels to supply the needed juice despite its distance from the Sun. Efficient panels indeed.