Among the many things that boggle my mind is the fact that we can learn things about the atmosphere of planets that we can’t even see. Take well-studied HD 189733b, a gas giant in close orbit around a K2-class star some 63 light years from us. No one has ever laid eyes on this beast, either in infrared or optical light. But that’s of little moment to the Hubble telescope, among whose tools is NICMOS — the Near Infrared Camera and Multi-Object Spectrometer. It and a lot of ingenuity get results.

A transiting planet like HD 189733b moves behind its parent star every two days or so. When that happens, light from the star itself (the planet now being behind the star) can be compared to the combined light of planet and star when both are facing the Earth. Any emissions from the planet can be examined, a useful window into its atmosphere.

Using such techniques, Mark Swain (Jet Propulsion Laboratory) and team have been able to detect carbon dioxide and carbon monoxide on this world, which had previously yielded methane and water vapor in Hubble and Spitzer Space Telescope observations. HD 189733b is too hot for life, but the find is interesting nonetheless: 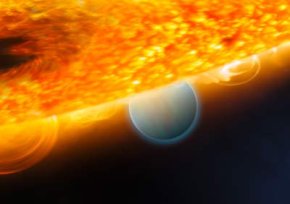 “The carbon dioxide is kind of the main focus of the excitement,” says Swain, “because that is a molecule that under the right circumstances could have a connection to biological activity as it does on Earth. The very fact that we’re able to detect it, and estimate its abundance, is significant for the long-term effort of characterizing planets both to find out what they’re made of and to find out if they could be a possible host for life.”

Image: An artist’s impression of the Jupiter-size extrasolar planet, HD 189733b, being eclipsed by its parent star. Astronomers using the Hubble Space Telescope have measured carbon dioxide and carbon monoxide in the planet’s atmosphere. The planet is a “hot Jupiter,” which is so close to its star that it completes an orbit in only 2.2 days. Under the right conditions, on a more Earth-like world, carbon dioxide can indicate the presence of extraterrestrial life. This observation demonstrates that chemical biotracers can be detected by space telescope observations. Credit: Credit: ESA, NASA, M. Kornmesser (ESA/Hubble), and STScI.

Note, too, that this is the first near-infrared emission spectrum ever obtained for an exoplanet. All of this plays nicely into plans for using the James Webb Space Telescope, scheduled for launch in 2013, for Webb astronomers plan to look for biomarkers on distant planets, some perhaps as small as the Earth, using spectroscopic techniques that work best in the near-infrared. Swain also notes that studying molecules in exoplanet atmospheres can help to reveal information about the weather on these worlds, as described in the paper on this work:

In a previous paper, we presented a transmission spectrum of this planet at the terminator, in which methane is seen to be more abundant… in the higher, cooler regions of the terminator region atmosphere. However, it is difficult to compare directly the previous terminator results with our current dayside results because they probe atmospheric regions with signiﬁcantly different temperatures and altitudes on this highly irradiated planet. The development of sophisticated global circulation and chemistry models could signiﬁcantly advance the state of the art in this respect.

The paper is Swain et al., “Molecular Signatures in the Near Infrared Dayside Spectrum of HD 189733b,” accepted by Astrophysical Journal Letters and available online.