The Kepler mission launches March 5, a date to circle on your calendar. Kepler may become the first instrument to detect an Earth-size planet in the habitable zone of another star, using the transit method to examine 100,000 stars in its 3.5 year mission. The 0.95-meter diameter telescope is now at Ball Aerospace & Technologies (Boulder, CO), having passed the necessary environmental tests that demonstrate its space-worthiness. And word has just come that it has also passed the necessary ‘pre-ship review’ for transit to Florida in January. 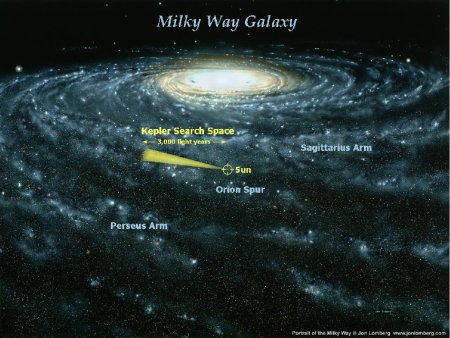 Image: An artist’s rendering of what our galaxy might look like as viewed from outside. Our sun is about 25,000 light years from galactic center. The cone illustrates the neighborhood of our galaxy that the Kepler Mission will search to find habitable planets. Credit: Jon Lomberg.

The image above, the work of the fine space artist Jon Lomberg, gives an idea of where Kepler will be looking. As always, Lomberg (creator of the gorgeous Galaxy Garden in Hawaii) manages to put things in perspective. The 100,000 stars Kepler will examine seem a vast number, but note the size of the cone covered by these observations when played out against the galactic disk. Note, too, the relatively spare star fields out in our part of the galaxy, with the tightly packed core and its teeming stellar billions not in Kepler’s view.

I wish I could catch a glimpse of the container housing Kepler somewhere along its route to Florida. When I was researching my Centauri Dreams book, I was out at the Jet Propulsion Laboratory just before Spirit and Opportunity were shipped off for launch. I’ll never forget looking at the rovers and thinking that the next time I saw them, it would be through cameras mounted on each, capturing their shadows and tire tracks in the Martian terrain. Riding a Delta II rocket into space in a mere seventy-five days, Kepler promises just as stirring an outcome, one that should give us insight into how common terrestrial worlds really are.