Years after Apollo, I ran into Frank Borman in a pilot’s lounge at a southern airport. I was waiting for a student who wanted to use the lowering weather to practice instrument approaches. Borman was just passing through. Then CEO of Eastern Airlines, he was accompanied by lawyers and was busy signing papers. I wanted to tell Apollo 8’s commander what that mission had meant to me, but I found myself completely tongue-tied. How to even begin to express what that first human presence around the Moon meant to all of us, and how to say it in ways that hadn’t been said a thousand times before? Larry Klaes is, fortunately, at no such loss of words as he describes what many still see as the most daring mission ever flown, and the stunning images and audio it sent back on that Christmas Eve forty years ago.

On Christmas Eve in 1968, three men took turns reading aloud from the Book of Genesis in the Bible. Such an event might not be terribly unusual then or now, considering the time of year in which it took place. 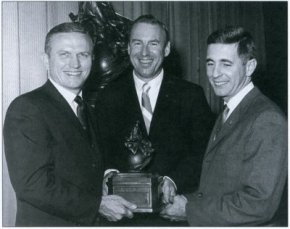 But the three people in question were no ordinary men, and they were speaking in no ordinary place. They were astronauts, and they were reading the ancient Christian story of the creation of heaven and Earth while in the heavens themselves aboard a silvery, conical spacecraft, with a view no other human being had ever witnessed in person before – from the vicinity of the Moon a quarter of a million miles away.

Image: The flight crew of the Apollo 8 mission, Commander Frank Borman, Command Module Pilot James A. Lovell, Jr., and Lunar Module Pilot William A. Anders, hold a replica of the Collier Trophy awarded for their historic first flight to the Moon. Credit on this and photos below: NASA.

Forty years ago this month, American astronauts Frank Borman, Jim Lovell, and William Anders were launched aboard a spacecraft named after an ancient god of many talents to become the first humans to ever leave low Earth orbit, where all previous manned space missions had stayed since the first one just seven years earlier, and venture to our planet’s only natural satellite.

It would be nice to say the mission of Apollo 8 was done purely in the spirit of adventure to gain new knowledge about the Universe. Certainly there was that element to this space expedition. However, Apollo was also created to best a rival nation with its own space program that had beaten the United States with numerous firsts into the void. 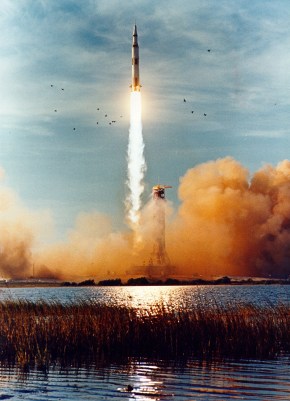 America’s chief opponent of the Cold War, the Soviet Union, had, in just over one decade, placed into Earth orbit the first satellite, living creature (a dog), man, woman, and conducted the first spacewalk. Further out, the Soviets also claimed the first robot spacecraft to land on the Moon and Venus. The communist nation had even sent a collection of plants and animals around the Moon aboard a spacecraft named Zond 5 just months before the launch of Apollo 8, returning them safely to Earth.

Image: A launch like no other, one that suddenly expanded our thinking beyond Earth orbit with a single, daring thrust.

The Zond vessel was a modified version of the Soviets’ then-new Soyuz manned spacecraft. It was evident to Western analysts that the Soviets were getting ready to send several cosmonauts to the Moon with their Zond, certainly to circle the distant globe and perhaps even to land upon it. With the prospect of the foreign superpower outdoing the Americans yet again with another and quite major space first, Apollo 8’s original mission to fly in a high Earth orbit was dramatically changed. 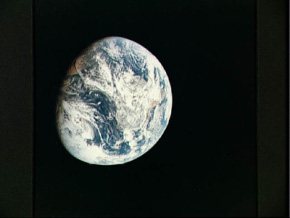 The new goal of Apollo 8 was to have three astronauts travel approximately 240,000 miles across space to orbit the Moon at least ten times before returning to our planet. Apollo had flown only once before with a human crew, orbiting just a few hundreds miles above our blue and white globe. The Lunar Module, the component of Apollo that would take two astronauts all the way to the lunar surface, was not ready yet to accompany the Command/Service Module (CSM) portions of the mission, so the astronauts would be traveling to the Moon without what would later become known as a “lifeboat” for the spacemen. Ironically, Command Module Pilot Lovell would have his life saved by a Lunar Module just two years later when a CSM oxygen tank exploded during the Apollo 13 mission, aborting the planned lunar landing and forcing the crew to use their Lunar Module to help get them home alive.

Image: Apollo 8 was all about changes in perspective. Suddenly we were seeing the Earth whole. Look closely and you can see nearly the entire Western Hemisphere, from the mouth of the St. Lawrence River, including nearby Newfoundland, to Tierra del Fuego at the southern tip of South America. Central America is clearly outlined. Nearly all of South America is covered by clouds except the high Andes mountain chain along the west coast.

Apollo 8 lifted off from Cape Kennedy in Florida on December 21, 1968 with the help from one of the most powerful rockets ever built, the Saturn 5. Three hundred and sixty-three feet tall, the Saturn rocket weighed over six million pounds and could loft 100,000 pounds to the Moon. No humans had ever ridden on such an incredible booster before, but thankfully the Saturn 5 worked as planned, sending Borman, Lovell, and Anders on a three day journey across space to Earth’s nearest neighbor.

When Apollo 8 arrived at the Moon on Christmas Eve, the astronauts began taking hundreds of images of the lunar surface, which Lovell described as “essentially gray, no color, looks like plaster of Paris or sort of a grayish beach sand.” Fascinating as it was to be orbiting an alien world closer than anyone had done before, the Moon was clearly a place where unprotected life from Earth would have no chance of surviving.

It was during this day of historical accomplishment and the reading of Genesis from the Bible that the crew of Apollo 8 made another important contribution to the uplifting of their species. The astronauts became the first people to witness the rising of their home planet above the lunar surface. The seemingly small orb with its bright blue oceans and white clouds stood out in stark contrast with the grayish Moon and the utter blackness of space all around. The photographs taken by the astronauts of that incredible sight did much to bring home to the people living on Earth of the finite nature of their world that they all shared. These images of our planet from deep space taken by Apollo 8 and subsequent lunar missions have often been credited with being the catalyst for the modern environmental movement. 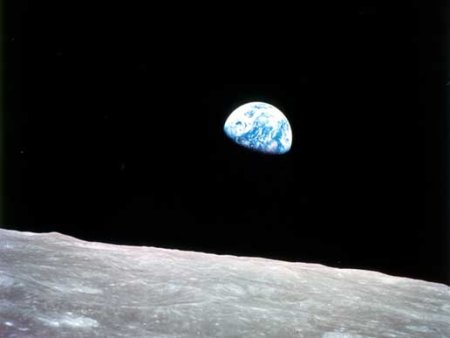 Image: One of humanity’s most famous images, this one caught a contrast that highlighted what it means to be a living world.

“We came all this way to explore the Moon, and the most important thing is that we discovered the Earth,” remarked Anders on the images he took during the mission.

Apollo 8 returned to that “meadow in the sky,” as Earth would later be called on December 27, splashing down in the Pacific Ocean. The space capsule is now on display at the Chicago Museum of Science and Industry.

Though humans stopped going to the Moon in person after Apollo 17 in late 1972, there are plans for new manned expeditions in the coming decades, including permanently manned bases on the lunar surface. Those future explorers will have to thank the bold mission that paved the way for them four decades ago.