Endurance Under the Ice

The Chicago Tribune offered up a Christmas day story on ENDURANCE, the NASA robot recently sent out for a shakedown mission in Lake Bonney, Antarctica. The lake is locked down under fifteen feet of ice, a place that could prefigure what we find under the ice on Europa. ENDURANCE stands for Environmentally Non-Disturbing Under-ice Robotic ANtarctiC Explorer, a vehicle created by Texas-based Stone Aerospace that is the successor to the Deep Phreatic Thermal Explorer (DEPTHX), which explored Mexican geothermal sinkholes in early 2007. 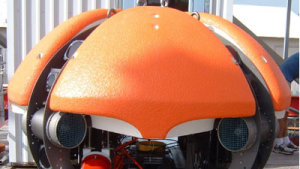 The Lake Bonney expedition is covering its story via blog entries accessible here, the most recent being a note from December 21, dealing with navigation in an environment rich in icebergs up against the face of a glacier. You may remember from an earlier story that ENDURANCE spent several days in the water at Lake Mendota, on the University of Wisconsin’s campus, last winter, with the new work pushing it into much harsher conditions. And history buffs will recall that Endurance was the name of Sir Ernest Shackleton’s ship, a vessel the Antarctic explorer had to abandon when it became abandoned in pack ice and crushed.

The incredible trek to the Antarctic coast that followed, and the ensuing journey to South Georgia, have become the stuff of legend, a fate that may well await the robotic ENDURANCE’s successors when they tackle environments like Europa and who knows what other subterranean bodies of water in the Solar System. For now, the current ENDURANCE is performing flawlessly at the end of its fiber-optic tether, “…determining its own routes underwater, evading obstructions and returning by dead reckoning to the team of relieved scientists,” in the words of the Tribune.

And this is interesting:

As it hovers under the ice, the robot spools out a series of instruments every few minutes that measure water temperature and dissolved materials as well as taking pictures of the ice above and the dark lake floor below. Days after it began, the robot found what looked like an outcrop of lichen-covered rocks—microbial colonies that researchers said were unlike any others known to exist in the lake.

“There’s some things in these images that I’ve never seen before,” said investigator Peter Doran of UIC [University of Illinois at Chicago].

Oh for the chance to try out a matured successor to ENDURANCE off-world! That, of course, will be a long-time coming, but developing the key technologies now is another step in the right direction. Lake Bonney, we now learn, turns out to be an ancient salt lake trapped under fresh water and ice, a reminder that we have much to learn about our own planet as we shake out these new tools. Autonomy is the ticket, of course, and ENDURANCE is already proving that it can choose its own routes, avoid obstacles, and work its way back to the scientists who dispatched it under some of the most extreme conditions on Earth.

Addendum: You can also track this story via Shilpa Gulati’s blog; Shilpa is a member of the ENDURANCE team now on the ice.