Could we find evidence of vegetation on distant exoplanets? The answer may be yes, according to recent work by Luc Arnold (Observatoire de Haute Provence) and team. If green vegetation on another planet is anything like what we have on Earth, then it will share a distinctive spectral signature called the Vegetation Red Edge, or VRE. The new paper creates climate simulations that explore whether planets with a distinctively different climate than modern Earth’s could be so detected.

Two earlier eras are useful here. The Last Glacial Maximum (LGM) occurred 21,000 years ago, with global temperatures on the order of 4 degrees Celsius colder than today, and a significantly lower sea level that produced more land surface. The Holocene, 6,000 years ago, is marked by a rising sea level amidst the de-glaciation occurring in the northern hemisphere. Perhaps the most striking contrast with today would be the Sahara, much more laden with vegetation than at any time since. Both provide a useful contrast with data gathered for the modern Earth. Thus:

The mid-Holocene is dominated by a greening of the Sahara, and a poleward shift of the high latitude treelines. The LGM is characterised by a large expansion of steppe and grassland vegetation at mid-latitudes, with a near disappearance of temperate forest. There is also the fragmentation of tropical forest and widespread expansion of tundra vegetation at high latitudes. There are, however, some disagreements with the data, for example the expansion of grassland in Australia.

This is fascinating stuff in its own right, as a look at the image below suggests, with its story of climate change on our planet. Check the paper for the full map legend. Today’s Earth is shown at the top: 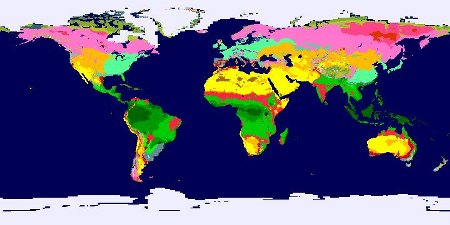 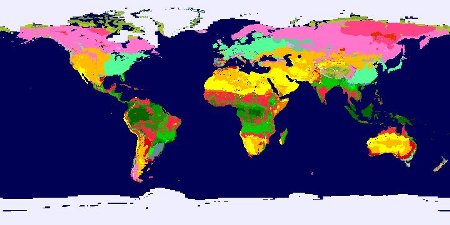 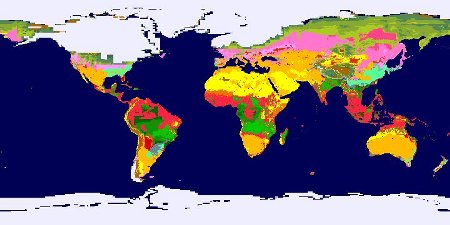 Image: Maps of biomes today (top), 6 kyrBP during the Holocene optimum (middle) and 21 kyrBP during the LGM (bottom), with continental and sea ices. Note that 6 kyrBP, a large part of the Sahara displayed a temperate grassland biome and almost no barren regions, while today and at 21 kyrBP, it consists of barren and desert (shrubland and steppe) landscapes. Credit: Luc Arnold and team.

In each climatic scenario, the model had to be adjusted for cloud cover and its reflectance, a fact Arnold’s team handled by using data from the International Satellite Cloud Climatology Project. This is highly complex modeling that must take in ocean and sea ice — I leave you to the paper for the methodological details. The primary result is encouraging: “…climate differences between the Quaternary extrema and the modern Earth’s climate have little impacts on the vegetation signal, since the spectral signature of vegetation is not washed out during the LGM and does not increase very much during the Holocene optimum.”

Meanwhile, what are the possibilities for an early detection of such worlds? An Earth-like planet in the habitable zone is 1010 fainter than its parent star as viewed from Earth. So the probability is not high with a first generation terrestrial planet finder instrument in the 4-meter range. In fact, a 6-meter telescope is apparently the minimum for detecting seasonal variations. But closer, larger planets may work. A super-Earth within 6 parsecs may be within reach of a smaller space-based coronagraph in terms of detecting a basic VRE signature.

And the kind of space-based interferometer — an array of small telescopes — envisioned as a successor to early planet finder missions may do much better. Read this remarkable paragraph carefully:

Hypertelescopes in space – interferometric sparse arrays of small telescopes – will indeed allow us to see Earth-like planets as small resolved disks several resels across… and this clearly will help us to detect photosynthetic life on these planets! For example, a 150-km hypertelescope would provide 40 resolution elements (resels) across an Earth at 3 pc in yellow light… And a formation of 150 3-m mirrors would collect enough photons in 30-min to freeze the rotation of the planet and produce an image with at least ≈ 300 resels, and up to thousands depending on array geometry… At this level of spatial resolution, it will be possible to identify clouds, oceans and continents, either barren or perhaps (hopefully) conquered by vegetation.

Will something like the planet in the image at left swim into view? We can only imagine, but there is every reason to believe that terrestrial class worlds are not uncommon, and as we noted yesterday, the discovery of one with a life signature would energize research and provoke renewed public attention to the myriad worlds around us. As the authors note, a next step for this work would be to extend the studies into even older epochs, when climates were more extreme than those considered here, to understand how stable a signature VRE can provide.

The paper is Arnold et al., “The Earth as an extrasolar planet: The vegetation spectral signature today and during the last Quaternary climatic extrema,” accepted by the International Journal of Astrobiology and available online.