An email from Greg Laughlin confirms that the planet HD 80606b has indeed been caught in a transit, a roughly 15 percent probability now turned into hard data. Laughlin (UCSC) and team recently wrote up their Spitzer infrared observations of this mutable gas giant, a world with an orbit so eccentric that it almost mimics a comet, swinging out to 0.85 AU from its star, then rushing in to a breathtaking 0.03 AU for a brief, searing encounter. The possibility of a transit has been on his mind ever since.

“If you could float above the clouds of this planet, you’d see its sun growing larger and larger at faster and faster rates, increasing in brightness by almost a factor of 1,000,” Laughlin said at the end of January in this JPL news release. His team captured what happens on this world as its atmosphere heats rapidly and produces 5 kilometer per second winds that create vast storm systems, gradually easing as the planet moves away from its star. I’ve already run the resultant image (which also became the cover of the late January issue of Nature that the paper ran in), but let’s see it again. After all, we’re looking at the most realistic image yet made of an exoplanet. 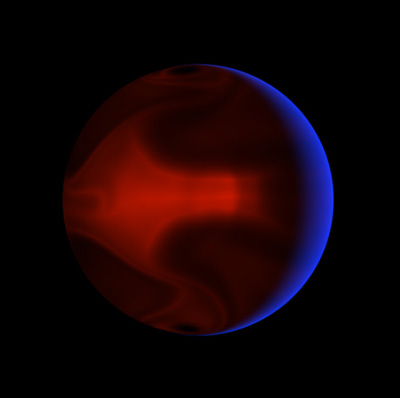 Image: The planet HD80606b glows orange from its own heat in this computer-generated image. A massive storm has formed in response to the pulse of heat delivered during the planet’s close swing past its star. The blue crescent is reflected light from the star. Credit: D. Kasen, J. Langton, and G. Laughlin (UCSC).

Of course, HD 80606b isn’t your normal exoplanet, not even by the exotic standards of the many ‘hot Jupiters’ we’ve found. Most of these — gas giants orbiting tightly around their parent stars — are assumed to be in tidal lock, with one side always facing the star. HD 80606b, on the other hand, is spinning, which gave the scientists the chance to collect data showing how its atmosphere responds to the changing temperatures.

From a recent systemic story:

Our interpretation of the light curve is that we’re seeing the planet heat up rapidly, from a temperature of roughly 800K to a temperature of about 1500K over a time period lasting roughly five or six hours. This indicates that the starlight is being absorbed at quite a high level in the atmosphere, where the air is thin and the heat capacity is low.

Who would have thought the storm systems of Jupiter were trivial? But compared to HD 80606b’s activity in the less than a day it takes to move through periastron, Jupiter dishes up little more than a tropical breeze. Observers worldwide went to work on the mid-February transit opportunity, covered by regular updates on Laughlin’s systemic site, even as they battled weather issues in eastern Europe and Scandinavia. The transit discovery paper notes that only five of the known transiting planets have a period of more than five days, with HD 80606b becoming the sixth and having much the longest period, a full 111.4 days.

All this has me wondering how anyone with an interest in astronomy could fail to be drawn to the exoplanet hunt in this remarkable period of discovery. Congratulations to Greg, whose tireless work on this sizzling world called the attention of astronomers to the transit possibility, and provided a continuing forum for discussion. It was fine work all around, and let’s hope Greg’s team wins approval on its recent request for more Spitzer time later this year and in 2010 to again study HD 80606b.

The discovery paper is Moutou et al., “Photometric and spectroscopic detection of the primary transit of the 111-day-period planet HD 80606 b,” submitted to Astronomy & Astrophysics (abstract). The Nature paper is Laughlin et al., “Rapid heating of the atmosphere of an extrasolar planet,” Nature 457 (29 January 2009), pp. 562-564 (abstract).

Addendum: David Kipping (whose work on exomoons we have examined previously in these pages) reports that he also detected the HD 80606b transit at the University Observatory of London. More on that catch in his team’s paper, “Detection of the transit by the planetary companion to HD 80606,” available here. Writes Kipping, “We are all very pleased here to have detected such a challenging target from the city limits of London. Due to the very long transit duration we are able to pin down the system parameters to a very high precision despite only using ground based telescopes. It really is a truly bizarre world, as Greg pointed out in his quotes in your article!” Nice catch!

Previous post: Edwin Salpeter and the Gasbags of Jupiter